“Two more up and downs and we’re there!” I said to Dean, but mostly I was telling myself. I picked Dean up around mile 32 after a tough climb out to Emma Carlin. I couldn’t run downhills anymore.

“It doesn’t even matter anymore,” he replied. 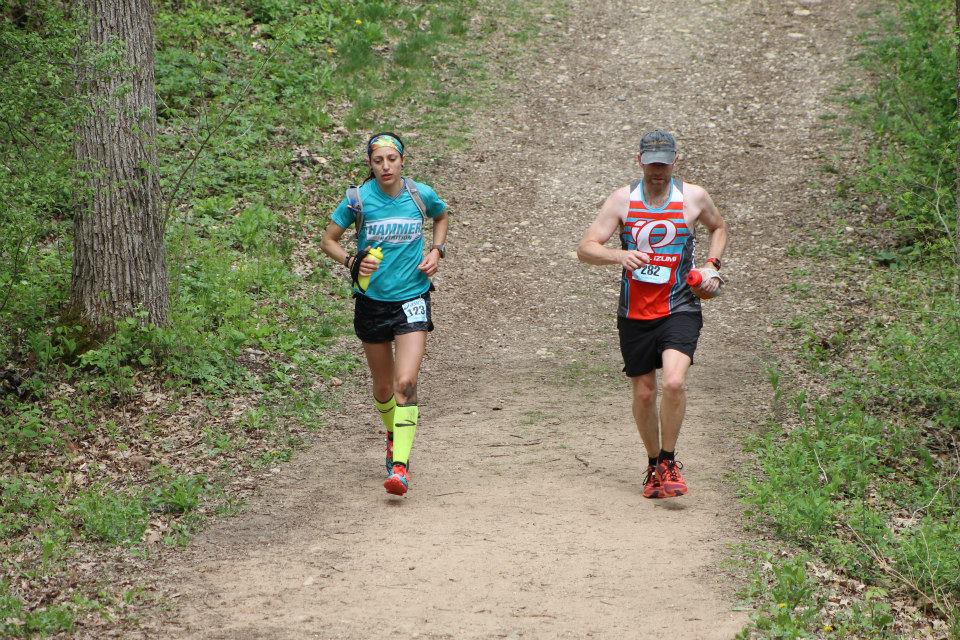 After the roller coaster day I had and the pain I had done my best to suppress, the thought of only two more “up and down’s” made the whole thing a little more bearable.

Monday, May 4th was the day I had given myself to decide if was even going to run this race. I hadn’t run in over a week.  Hailey and I got home from our normal Monday spin class and  I ran a few miles on the treadmill but didn’t feel anywhere near 100%. I decided to drop down to the 50k if possible, or even drop the race all together until I stumbled upon the Ice Age Trail 50 preview.  I was shocked to see my name. I couldn’t drop now. I was disappointed and couldn’t believe I was in this situation AGAIN. 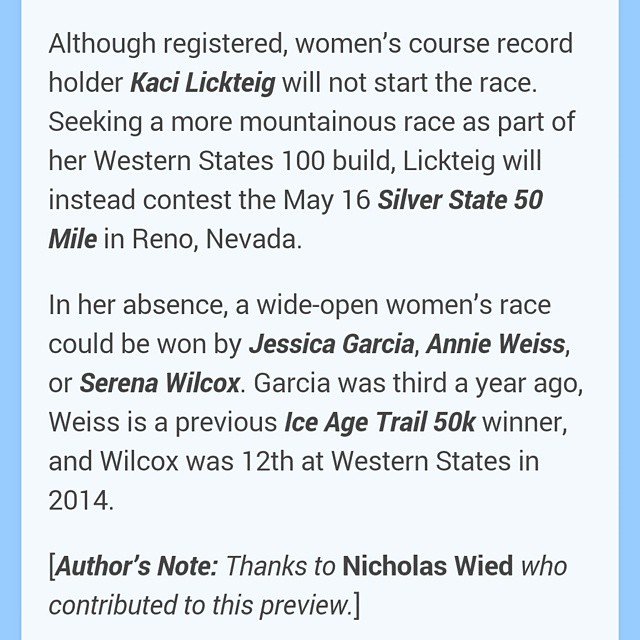 I hadn’t run anything more than 2 miles in two weeks leading up to the race. I tried to get a few short runs in on Tuesday and Wednesday. My hip didn’t exactly hurt, but it felt weird. Oddly enough, the weirdness went away as the time went by; almost like after it warmed up it felt better.

I had to take a chance. 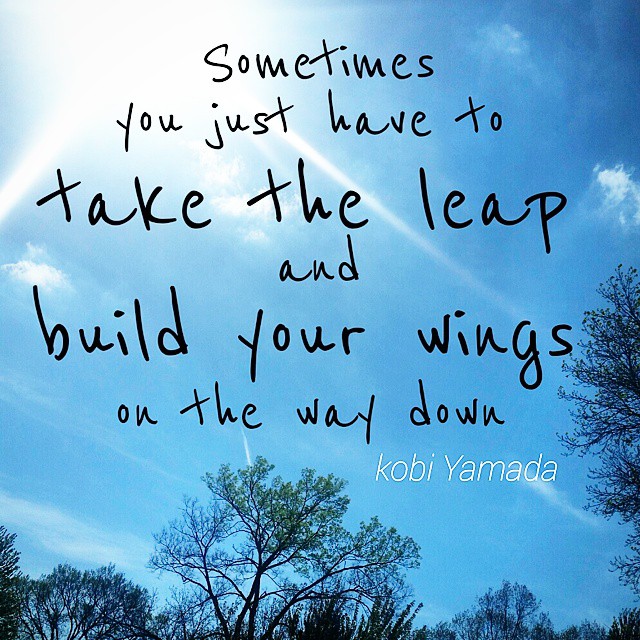 The morning went smoothly, I got up with enough time to get ready, eat some food and head over to the Nordic Loop. The parking lot was buzzing with people and energy. I chatted with some friends here and there and headed to the start line. Jason found me and we chatted a bit.

The race started and people flew off the line as usual. I had a hard time controlling pace and hiking the hills  because I was running with a group. I had a lot of fun chatting with Jason and the group we were running with. One guy wore a tri suit and kinvara 3s which isn’t the usual trail running attire. We had fun chatting about silly things and having a good time.

In the back of my head I kept thinking things like…

“I wonder how far I’ll get before things break down?”

This time around I had a much better understanding of the trail.  I knew what to expect with every section. Mentally and physically the hardest part was going to be the section from Hwy 12 to Rice Lake and back. Even though I’ve run that section multiple times in the past few weeks I knew what I was in for.

One of my favorite parts about this race is finishing the first 9 miles around the Nordic Loop. The start/finish line is always such a party and the energy at this race is always amazing. This time the 9 mile loop would determine if I could keep going.

I finished the 9 mile loop in 1:17:56 and I felt AMAZING! I looked for familiar faces in the crowd. I’ll never forget the moment I saw one of my crew members standing on the deck cheering for me! That was the moment I felt a lot of relief. I was going to keep going and I didn’t need words to tell my crew that… I know they could see it on my face!

I didn’t stop at the mile 9 Aid station, instead I had everything I needed with me. I started fueling on Hammer Gels. I aimed for 1 Hammer Gel every 45 minutes along with one endurolyte tab every hour(ish).

I felt great heading out to Highway 12. I looked forward to seeing my crew and knew exactly where my friend Kasey would be photographing. I started getting close and starting yelling “Kasey!!!!” sure enough she heard my loud mouth yelling her name and I heard her giggle in the woods!  It was so great to see her smiling face behind that camera yelling “GO Jess!” I needed the positive energy from her! 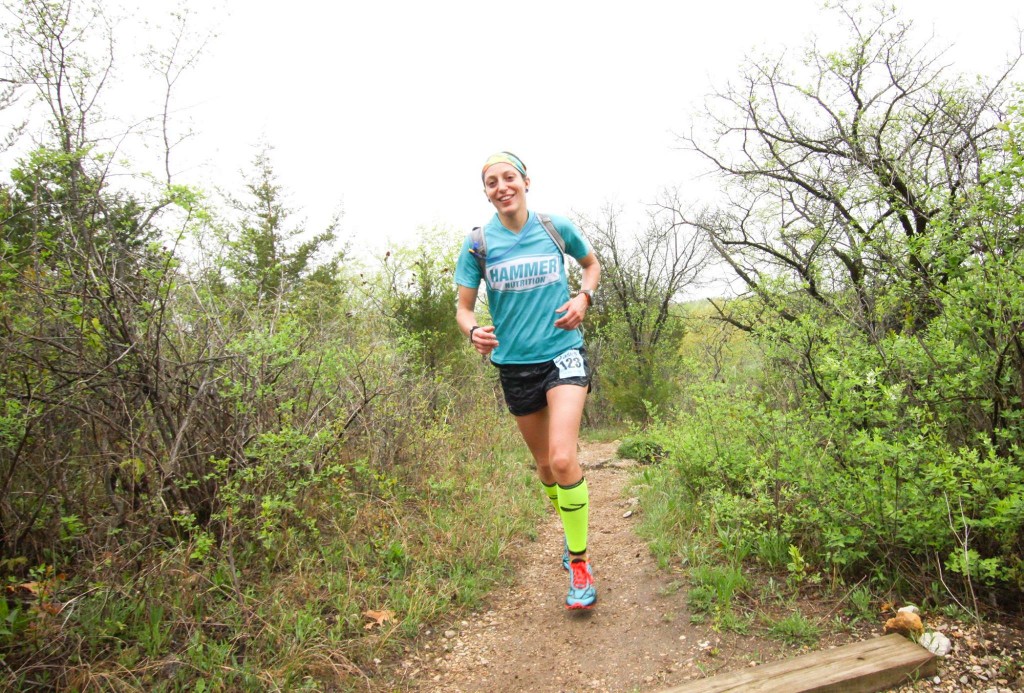 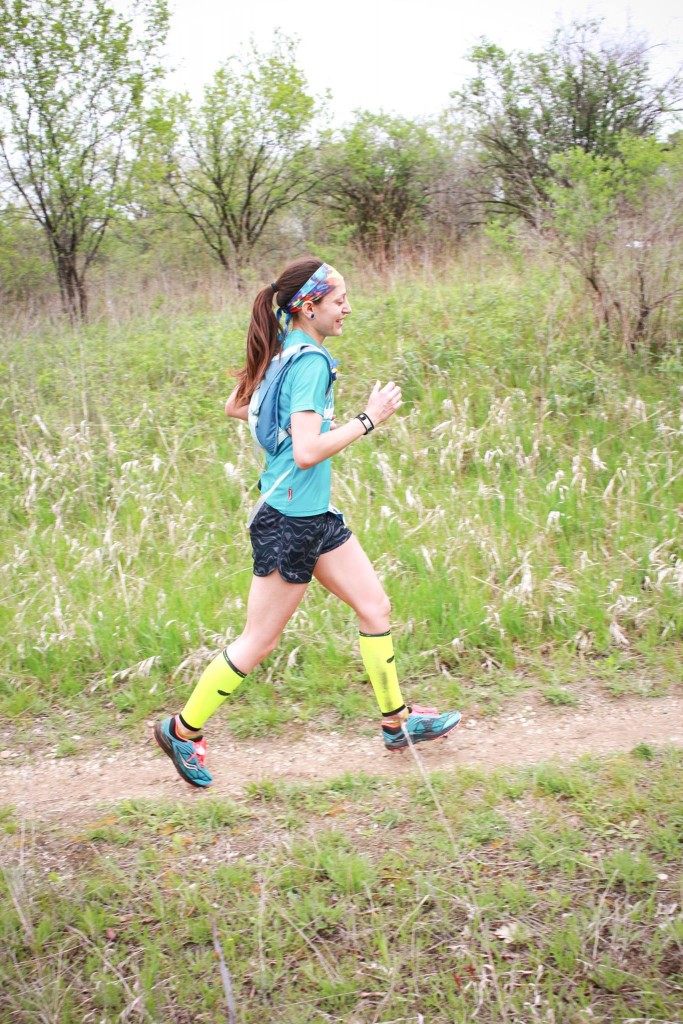 I ran through Highway 12 without stopping and tried to mentally prepare myself for the next section. The section out to rice lake is the most technical and rocky segment and on the way back to highway 12 there is a decent hill to climb. I really had to slow down a bit and collect myself. I’m not sure what it was but I felt very anxious and panic-y for the first few miles out from HWY 12. I was able to calm myself down and focus on the task ahead.

Soon I was getting close to the bridge section near rice lake, also another favorite part of mine. I knew my people were going to be there again so I started Woooooooping and yelling “Kasey!!!” When I came out of the trail to cross that bridge there they were! They got a video of me crossing the bridge that I couldn’t stop watching after the race. There was a lot of happiness in that moment. Shortly I made it into the Rice Lake aid station and headed back to Highway 12 without stopping. 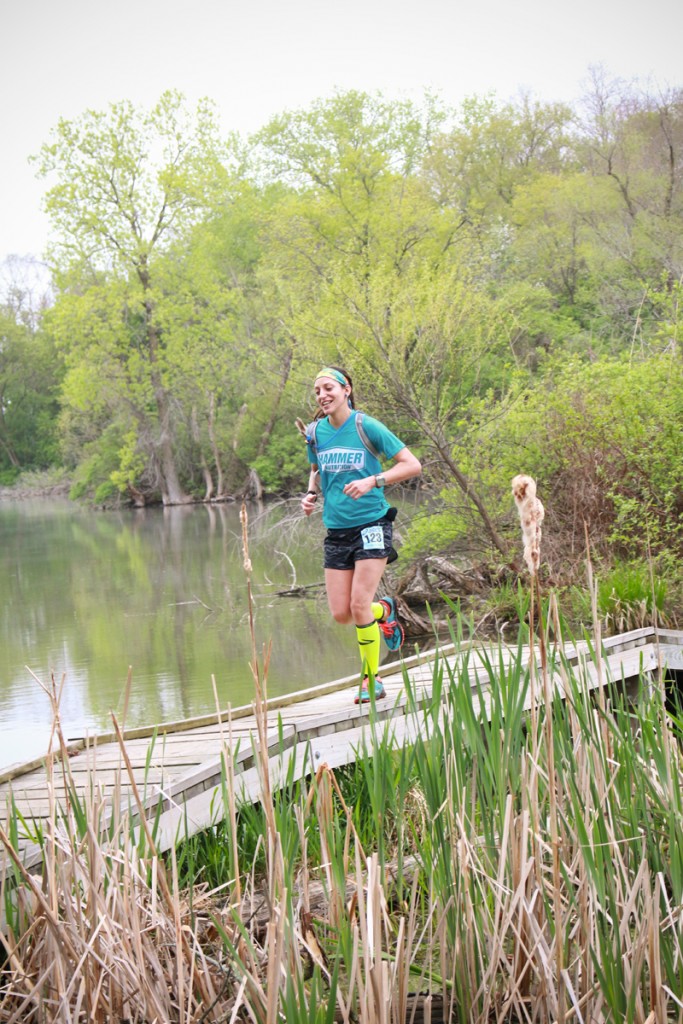 I got to see my crew again at the bridge and I said “I’ll see YOU at Highway 12.” I was planning on stopping this time and picking up some Hammer Perpetuem. On the way back into 12 the suffering started. My knee was going out of wack and I started having a really hard time with downhills. I did my best to run flats and even a few hills here and there since I couldn’t get any downhill running in.

Finally I made it to 12 and my people. This would be my first stop of the entire race. Half-way there! I picked up a bottle of Hammer Perpetuem and switched out my spi belt for more Hammer Gel. I think my crew could see that the trails were starting to wear me down. They gave me encouraging words and I headed off. I had to run almost 14 miles until I could see them again. 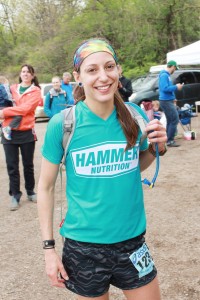 I HAD to make it 40 miles before I could drop. I didn’t know if I could make it, but I kept going anyway. I couldn’t remember all of the section out to Emma Carlin. Anything passed Horse camp I couldn’t remember. This time, all I remember was suffering the downhills. The climb around mile 30 was tough and this is when I picked up my buddy Dean. He was having a hard time  and stopped to stretch a bit. I offered to let him pass me but he said he wasn’t moving too well so I started down the other side of the climb. My entire right side was beat.

On one of the downhills I tripped and fell flat on my knee and hands. It was a little tough getting up since I was on a hill and all. Dean, who was behind me saw and asked if I was ok. I got up and tried to run it off… eventually I felt alright again. Dean and I chatted for a bit.

My second trip of the day was shortly after the first. This is the one I thought would take me out of the race. I felt a sharp stabbing pain in my hip, I was able to stay on my feet but I thought  I wouldn’t be able to finish. I had to hold back tears. I told Dean that he didn’t have to stick with me but he insisted. So on we went, I’m sure I whined to him more than he wanted to hear, I’m sure he was dealing with his own pain. We started chatting and it was good to hear about his family. His girls and wife were at so many road crossings cheering which was very uplifting. 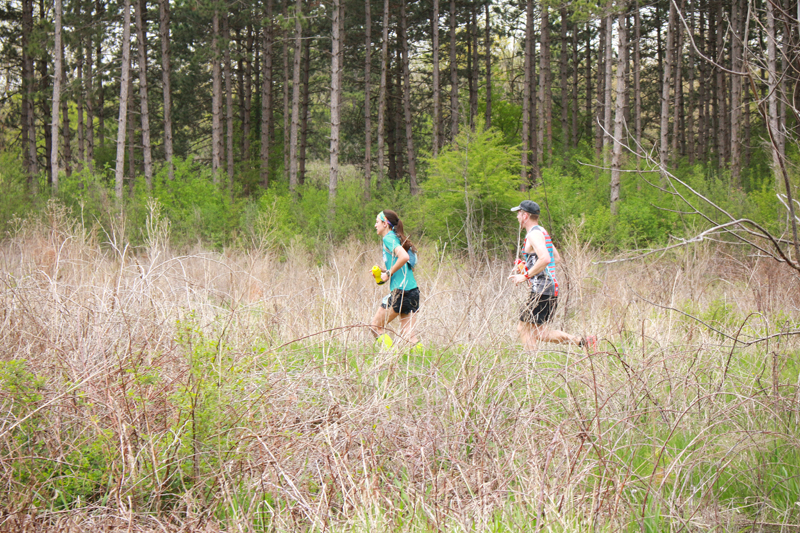 Around this point I knew I was off schedule and I knew my people would be worried. I made it to mile 40 by 7:02 and there was no way I could make my 8 hour finish. My crew refilled my camelbak and gave me another bottle of Hammer Perpetuem and we headed back in. Even though I was feeling a lot of pain it was still great to see them. Energy wise I felt amazing… now if only my body could have kept up with that energy. I knew the last 10 miles would be a lot of suffering.

The next 5 miles were a blur, they were slow, the miles dragged by but eventually we made it back to Horse Camp and then back to Young Road before I knew it we had 1.5 miles left. I honestly didn’t think I could run for 1.5 more miles back. So we did what we were doing. Hiking hills and running as many flats as possible. We passed a few people running other distances, but one man stuck out to me. As we passed he said to us.

This was so true and fitting for the struggle today.

“Two more up and downs and we’re there!” I said to Dean, but mostly I was telling myself.

“It doesn’t even matter anymore,” he replied.

Finally we made it, we could hear the party and see the crowd. The cheering started, the crowd was pumped and I broke down. I tried to fight tears because let’s face it, there were A LOT OF people watching me! I found my people and cried as I crossed the finish line. I was pretty wobbly at this point and so glad to be done. I came in 57 minutes later my goal time but I finished and that was the biggest accomplishment EVER! 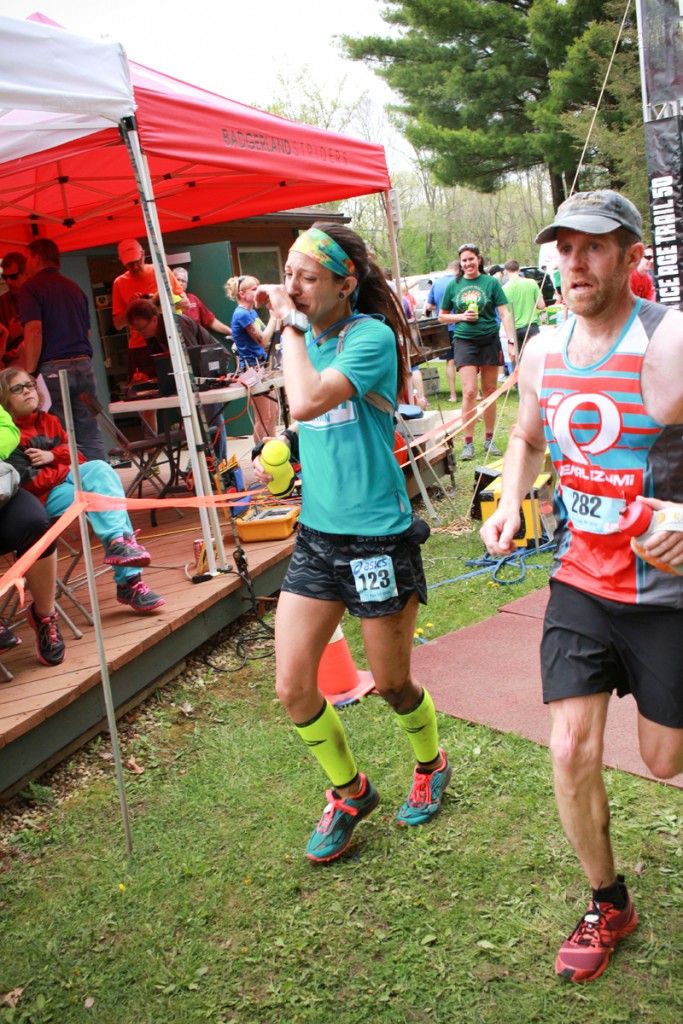 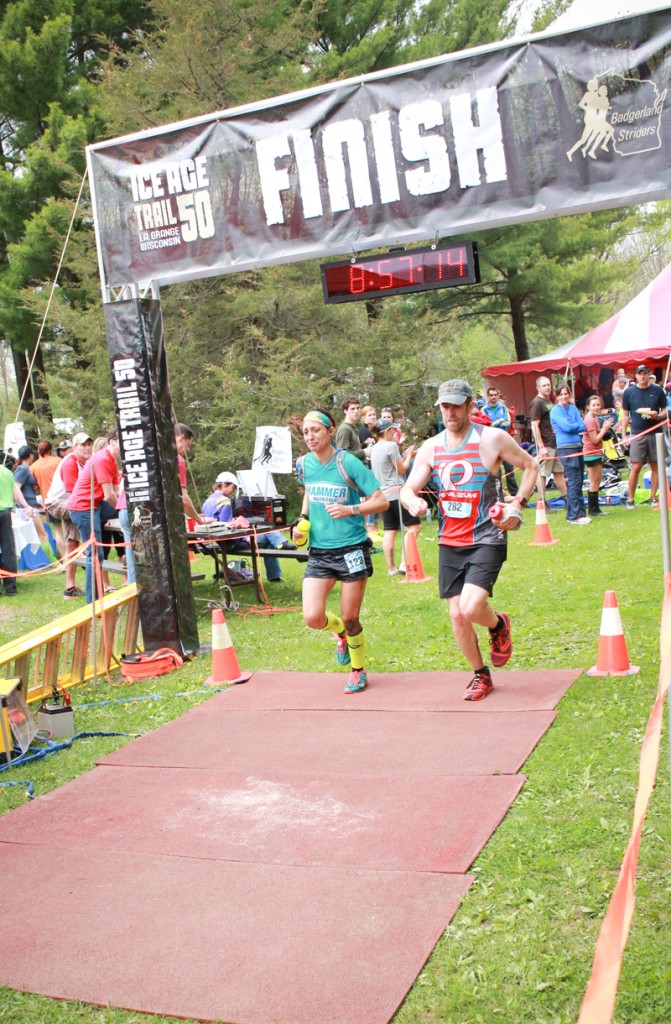 I had the best people crewing me, taking care of me, photographing me and keeping my spirits high when things got hard. The people I met on the trails were absolutely amazing, and I’m happy to say I’ve gained a few friends in the process. Sure, I race, and yes I like to win, but even when I don’t “win” I do in other ways. New friends, old friends, and an amazing runner’s high at the end. Even though I didn’t meet a goal or Hit a new PR I wouldn’t change a thing about the day.

Nutrition is something I have nailed down. throughout the day I had 6 Hammer Gels (Chocolate, Peanut butter and Apple Cinnamon), two bottles of Hammer Perpetuem, Hammer Heed and a few Endurolytes when I didn’t have Heed available. Energy wise, THERE WAS NO CRASH!!!  There was also no nausea! I ran 50 miles on all liquid energy thanks to Hammer Nutrition. Instead of worrying about my stomach I could focus on my body and the trails! I’m absolutely blown away by how amazing this Hammer stuff works!

Now it’s time to rest and recover. Kettle is up NEXT! 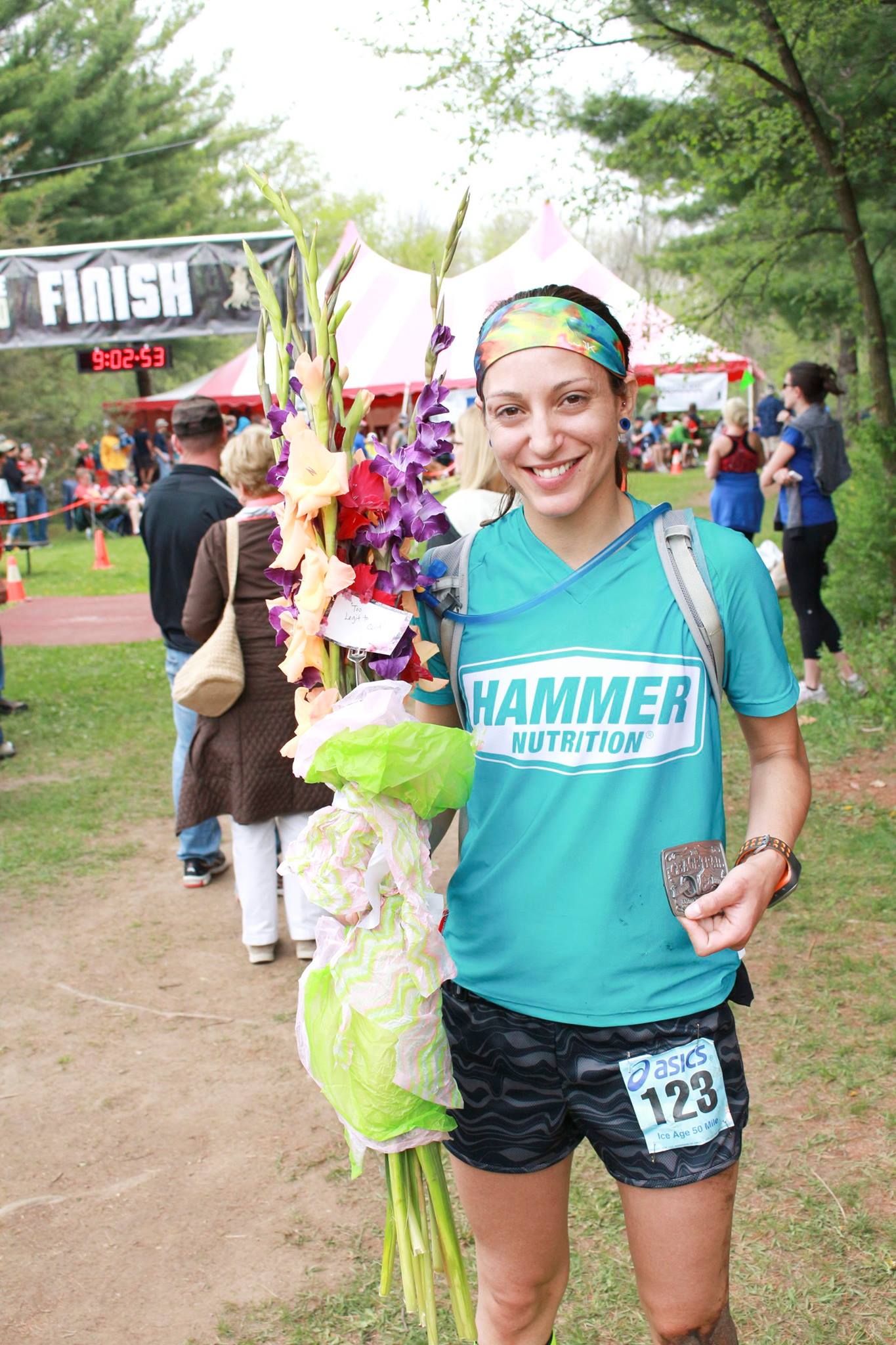 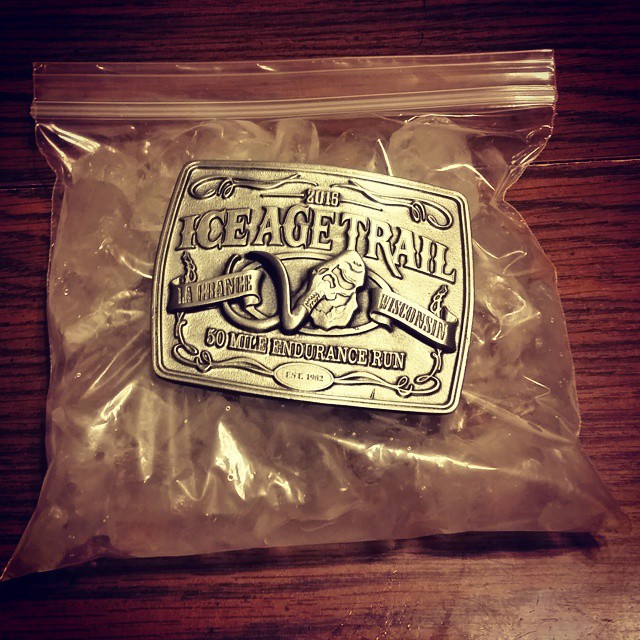