I can still feel the energy buzzing around from last weekend’s race.  Looking back I have to admit this was my strongest run to date.

In the days leading up to the race I was anxious but still confident. I knew I could complete the 50 miles but I didn’t know what to expect when it came to time.  The course was much different than the previous 50 milers I have tackled, so using my previous run time wouldn’t make much sense. I finally decided, with the help of some fellow ultra runners, to “run my own race…”

“Running my own race” meant that I didn’t have a plan. I started the race without a specific time goal.  I wanted to be under 10 hours, which was my previous 50 mile PR. Other than that… nothing.
Another thing I was worried about was going out and being crewless.  This was my first race that I didn’t bring along a support system. My people wouldn’t be there smiling and cheering at every crew access point. I would have to rely on the aid stations and strangers cheering for positive energy.  This frightened me a bit, but I knew that if I could focus I’d be fine.

My friend Marty was gracious enough to give me a ride to the start/finish line.  He was heading out to the mile 4 aid station to set up and volunteer. I dropped off my drop bags, one for the Highway 12 aid station and the other for Horseriders Camp aid station, and headed to the port-o-jons.  Then, I met up with Shane and hung out with him for a bit before the race.  We walked around and looked for Dan and Heather to say “Hi” and “Good luck!”. Before we knew it we all scattered in different directions at the start line. I decided to start toward the middle. I didn’t want to worry about getting caught up in the race.

The race started unexpectedly. Before I knew it, I heard “Ready, set, go!” We were off! The leaders took off fast. I was amazed at how quickly they raced out of view. We started out on the Nordic loop, a 9 mile loop that I was pretty familiar with. To be honest, I’ve always been intimidated with this trail section, until this year.  After a 50k training run earlier in the spring I became much more comfortable with it. I felt confident running it, and I tried not to run too hard. I ran most of the hills with the exception of some of the big hills. I was feeling great!

I was very excited to see Marty at the mile 4 aid station! As I ran by, he asked if I needed anything. I didn’t, I gave him a high five and I was off. 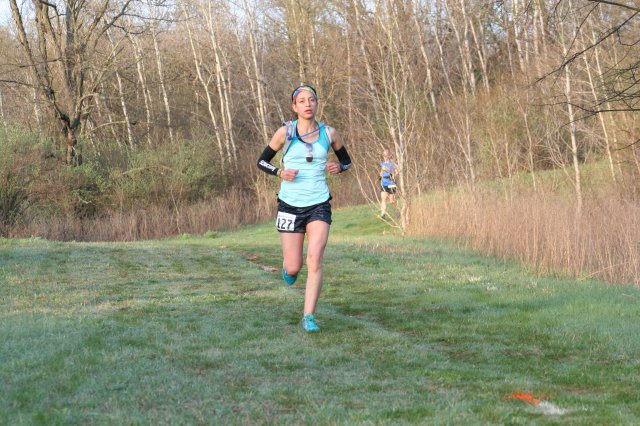 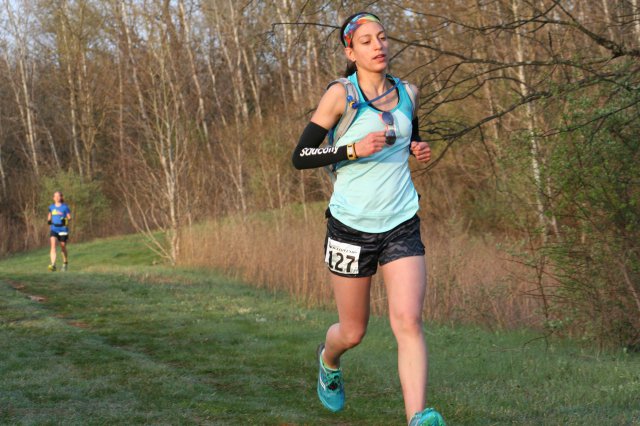 Finishing up that 9 mile loop was great! I loved running into the 9 mile aid station. Both sides of the trail were lined with people cheering and clapping. It really was a party in the woods! I quickly grabbed some pretzels and a handful of potato chips and headed back into the woods.  At this point we began running the 9 mile loop again and to be honest, I thought I was going to go the wrong way. I knew there was a turn off somewhere and we’d have to cross the road, but I wasn’t sure where. I began to worry as I ran. Over-thinking things again.  Sure enough, there was an aid station with volunteers pointing me in the right direction across the road. The next sections were less familiar territory to me. I’d only been on this section of the trails a couple times. I knew there was a bit of climbing and also a bit of technical single tracks. 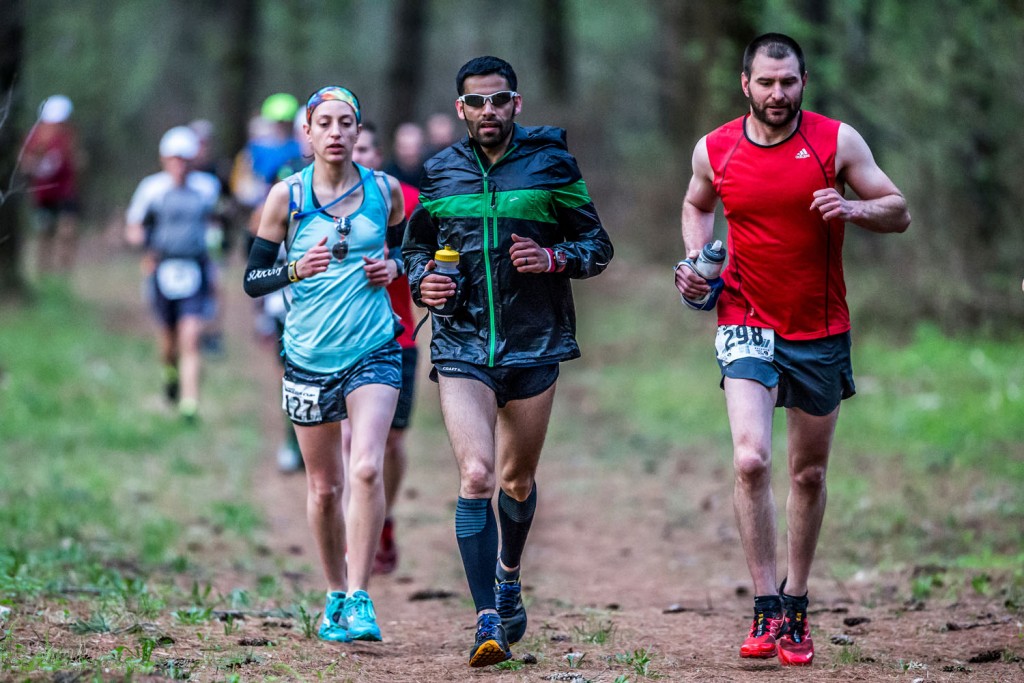 Talks of confusion corner worried me, and if it had not been for the friendly volunteer I would have completely missed it. He warned me to slow down and turn, I didn’t quite understand him right away and I was going pretty fast down the hill. He got me going in the right direction.

I can’t exactly remember when I actually started to have a plan, but I noticed that it was pretty easy to pass people at aid station stops. Without thinking about it too much, I decided to spend as little time as possible at aid stations. Literally, I was doing a “Grab and Go”.  I made sure to always thank the volunteers because they were pretty amazing! I could pass 2 or 3 people at a time and fuel up as I ran or hiked. I wasn’t sure if it was a good idea or a really dumb one, but I tried it.

I loved the fact that the course had two out and back sections. I loved being able to see other runners along the course. It’s one thing to pass other runners, it’s another to see their faces and offer encouragement. This was my chance to exchange positive energy with other runners. I knew I needed some positive energy and distraction! Shouting out “Great Job!”, “Keep it up” and “WOOOT WOOOO!” along the way really helped distract me and made me really happy!

The first out and back section was pretty technical to me but it was fun to get going on those single tracks! I remember checking in at the 13 mile aid station.  I was distracted and wasn’t planning to stop. I forgot to shout out my number, when I was stopped by a man with a clipboard. I gave him my number and ran on. On the way back in, around mile 30, the same man with the clipboard said “You’ve moved up 10 places since mile 13!”

“Dunno, how that happened…” I said as I peeled a banana. I spent a few minutes here and ran on. I was more focused than ever and I was getting through the aid stations as quick as I could. Now, the trick was to hold onto that.

My favorite aid station had hula stuff, pickles, and potatoes! One volunteer admitted that she’d be out there with us next year!

By mile 30 my feet were really hurting. I was a bit worried. I’ve never had this issue before! I was imagining giant blisters on the bottom of my feet and in between my toes. At one point I felt one pop. I hoped that this wouldn’t bring me to a walk or even a DNF. I thought about changing my shoes at the Horseriders Camp aid station but decided that it would be too time consuming.

There were some pretty tough sections up to Emma Carlin that I wasn’t expecting. At this point in the race I was hiking more uphills and running every section that I could. I spent very little time at the turn around and headed back in. The next lady was about 5 minutes back so I picked up the pace a bit. I’ll admit I ran more in this race than I had in others and it felt great! Once the day got warmer and warmer I started dumping cups of water over my head to cool down. I also asked the aid station for ice and threw some in my sports bra to cool down. I’ve learned from experience that it’s best to keep cool as soon as possible.

On the way back in I chatted with a man, I didn’t catch his name.  He had an interesting accent.  We chatted about the race and he admitted that he’s never really run a “hilly” course like this before.  He also admitted that he had never been “chicked” before.

“Well, you’ve only been chicked by 6 so far!” I joked. He also went on to admit that the heat was getting to him and he really started to struggle.  He said he was going to try to stick with me so he could stay on pace. At that point I wasn’t sure I could hold a 10 minute mile. It was nice chatting but once we hit an aid station we got separated.

I was honestly counting down the miles from mile 35, mostly because I started my second garmin. 15 miles didn’t seem too hard and as the miles went down I seemed to get more energy and I was feeling great. As I went past the Bluff Road aid station the volunteer asked if I needed anything.

“No thank you! I’m done!!!” I said as I ran.  I was feeling stronger than ever. I looked at the time and I knew my people wouldn’t be there yet. I was early, much earlier than I had planned – even though I didn’t have a plan. I wasn’t upset or disappointed that there wouldn’t be anyone there to celebrate with me. I was focused, I was proud, I was happy and I felt great!

I ran into the finish right into that party in the woods. It was amazing to see the finish lined with people on both sides, clapping, cheering, eating and drinking. I’d never seen this place so busy and so full of energy! As I crossed the finish line I glanced at the time clock. 8:14:48. I couldn’t believe what I had just done. 1 hour and 45 minutes off of my previous 50 mile time and I did it without my crew! 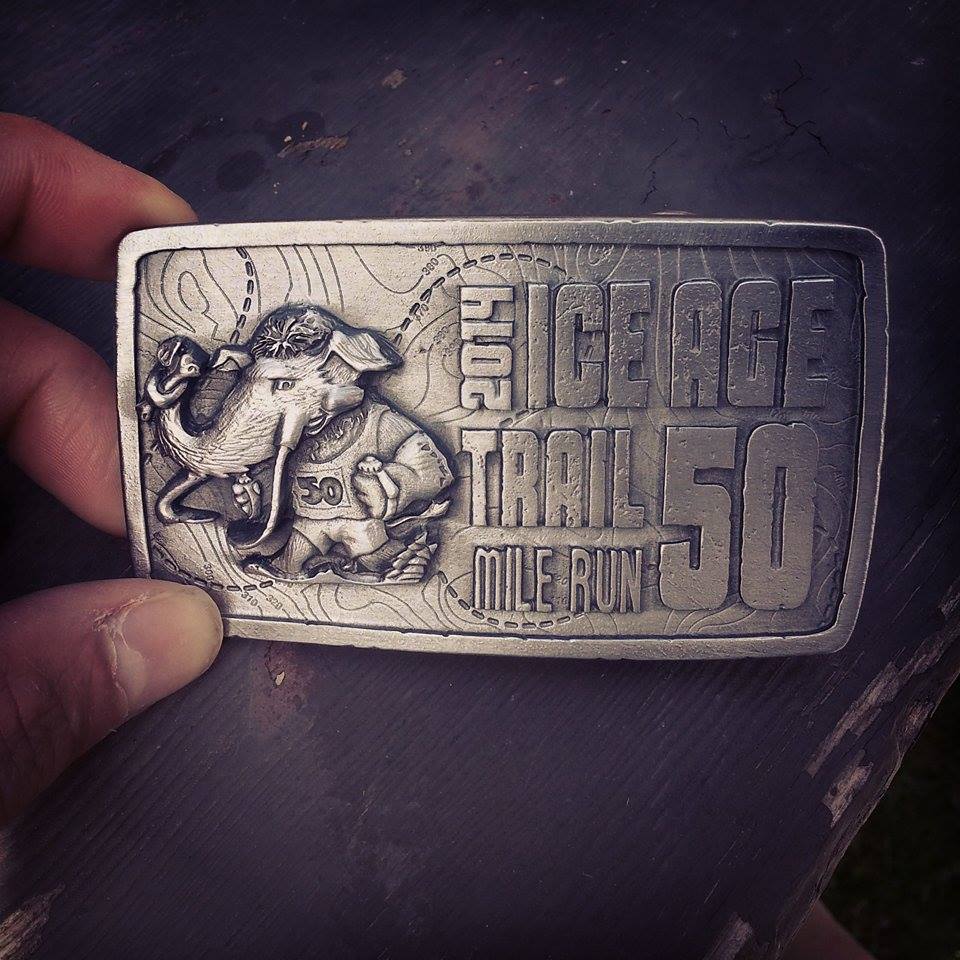 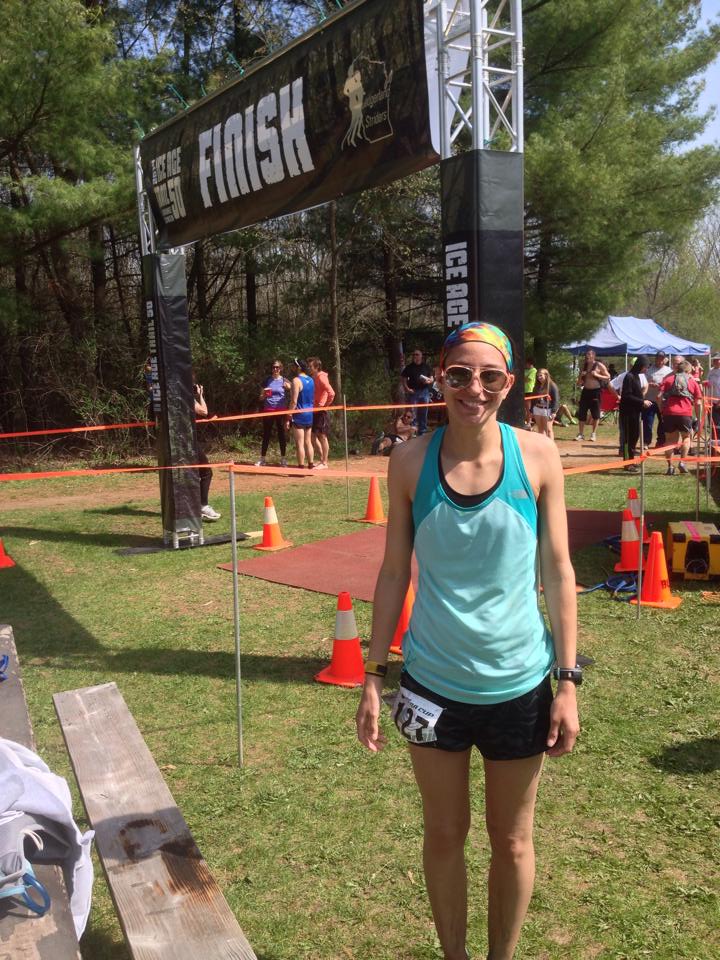 Nutrition wise I took in Hammer Gel, Salt Stick capsules, potato chips, pretzels, a couple pickles, a couple potatoes (they were only at the hula themed aid station) and of course some water. Everything just worked… probably my best race yet, but I feel like I keep saying that with every race I do.

I’d love to come back to Ice Age again! It’s so well organized, there are GREAT volunteers, the course is beautiful yet challenging and the energy out there is unlike anything else!

Now it’s onto recovery mode and soon Kettle 100! It’s going to be a great year!