I’m still so excited about how well things went at the Fox Cities Marathon.  The race could not have gone smoother for me.  After a busy day photographing a good friends’ wedding, Steve and I headed to Appleton.  We arrived a little late but got settled and checked in pretty quick.  We sat down together and ate burritos that we picked up from Qdoba before we left Janesville.

After we finished eating I organized my race day gear. I was feeling a little anxious because I had only brought  shorts, t shirts, and tanks.  The weather called for rain and I had left my rain jacket and long sleeves at home.  I was worried about being cold.

I took a quick shower before bed and laied down when it started storming. It’s safe to say that I didn’t get much sleep that night. I only got about 6 hours of sleep between the wind blowing open the air conditioner vents and what sounded like a rather large group of people chatting loudly outside our window.

I woke up before my alarm went off.  I looked at the weather app on my phone to see the rainy icon. It was in the 50’s which isn’t bad running weather at all but the rain still made me nervous.  I got dressed and packed up my race fuel in my spi belt. I bought 4 Hammer gels, Salt tablets, and ginger chews.  I was still really worried about being cold so I told Steve that we might have to stop at Wal Mart for a long sleeve.  He told me we didn’t have time and he was right.  I was just over-thinking things.

Steve and I headed downstairs for breakfast. I had a bowl of Malt-O-Meal, a banana muffin, and probably 3 or 4 bananas.  At this point I was probably just nervous eating. We headed to the starting line which was about a 20 minute drive from the hotel. Thankfully it was only sprinkling and the temperature was comfortable.  The minute I walked outside I knew that what I brought would be fine.

As we got closer, traffic got worse.  I felt a bit nervous when we were stopped at a traffic light trying to turn right for what seemed like forever.  We weren’t really sure where we were going or where the starting line was but there were people everywhere so we just followed the crowd.  We found a perfect spot which was very close to the starting line.  We met up with Jason, who had picked up my race packet and headed to the starting line.  We didn’t have much time to talk and we all parted ways. 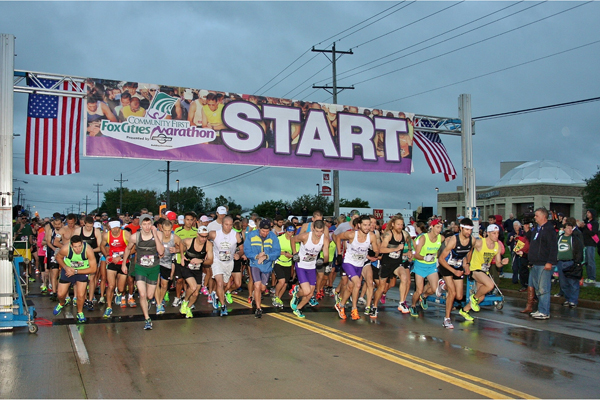 The starting line was pretty packed.  There were nearly 5,000 runners running the half marathon and marathon along with relay runners and a large group of people walking. Jason and I both started in Coral A.  He was shooting for a 3:10:00 and I was hoping to be around 3:35:00 to qualify for Boston.  Jason headed toward his pace group and I found the 3:35:00 pace group. The pacer was awesome! He was a friendly guy and offered lots of marathon and course knowledge.  I was pretty excited to run with that group because it seemed like a great one!

Jason had given me advice earlier that week. He told me to run the 1st mile no faster than my goal pace which was 8:12.  I stuck with the 3:35:00 pace group for the first 3 miles before I decided to speed up a bit. I was a little worried that I would regret speeding up.  I kept imagining the 3:35:00 group catching up and passing me and thinking I was stupid for leaving the group.

A few times I noticed a lone runner on the sidewalks.  He was wearing a camelbak and ran just ahead of the 3:30:00 group.  It seemed like he would come and go.  Then I realized that his run was familiar and so was his hair.

“Hey are you Zach?” I asked when I caught up to him.

For those of you who don’t know who Zach Bitter is, he’s an amazing athlete.  He’s a Wisconsin native who currently holds the 100 mile American record of 11:47:21.  He has set a number of course records at races including The Fall 50, John Dick Memorial 50k, Kettle Moraine 100k, Mad City USATF 100k, and Psycho Psummer 50k.  He’s one fast dude both in marathon distance and in ultra marathon distances! 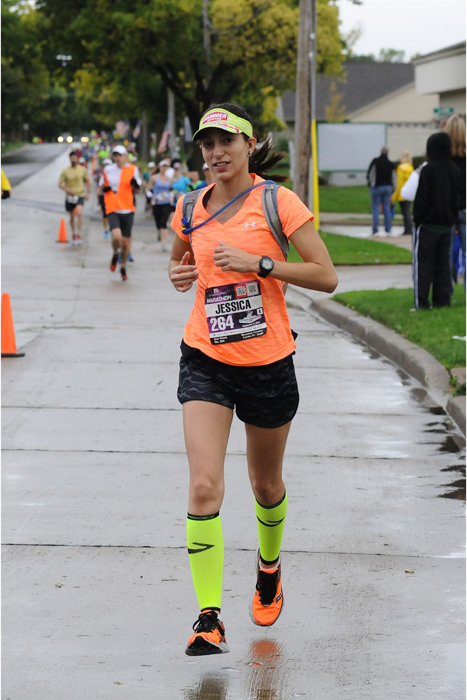 “Uh-Oh! This isn’t good, I’m going to burn out…” I thought.  I took it back a bit and wondered if I should have just stayed with the 3:35:00 group.  By this point the 3:30:00 group had thinned a bit. There were a few other women who had either slowed down or sped up and there were only a few guys left.

The 3:30:00 group was a quiet bunch.  I tried to start conversation around mile 19 but I didn’t get much back other than a few farts out of one older gentleman. 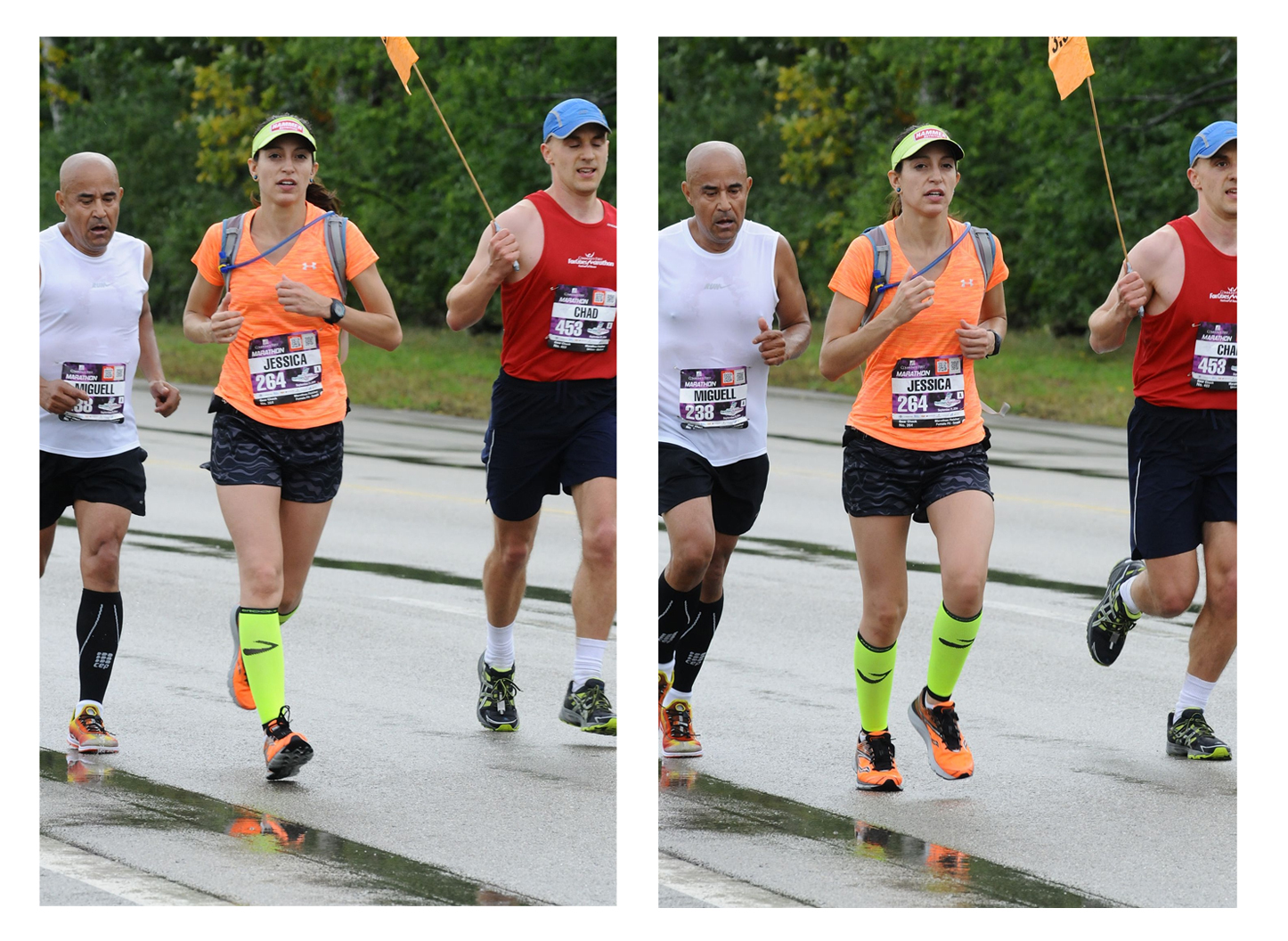 At mile 20 a crazed spectator started yelling “GO MIGUEL!!!!” over and over and over.  It was almost annoying but in the end it brought my spirits up.  He ran with us a bit yelling things like “GO MIGUEL!!”, “YOU GOT THIS!”, “ONLY 6 MORE MILES!!!”, “ALMOST DONE!”, “YOU LOOK STRONG!!”.  Shortly after he stopped running with us he jumped on a bike and biked next to us for a short time and offered mobile encouragement.

Around mile 22 I got a pretty severe side cramp.  I took a few seconds to walk and took a salt tab.  I had to keep running.  I figured I could walk a bit if I ABSOLUTELY HAD to but I needed to run as much as possible.  I kept imagining that this would be the point the 3:35:00 group would catch me and pass me.

By mile 24 it was tough to hold an 8:12 pace and by mile 25 I was getting emotional.  My legs were starting to slow and they felt heavy.  My tummy was feeling barfy and my heart rate was out of control reaching the high 170s. My body was ready to be done. If my brain was working right I figured I still had over 10 minutes to run 1 mile…. 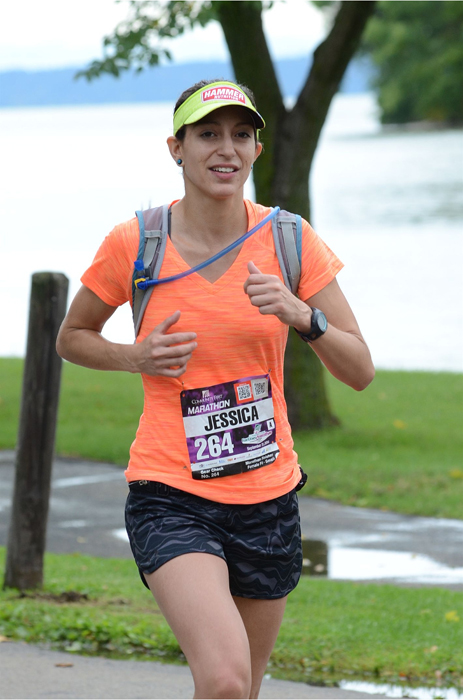 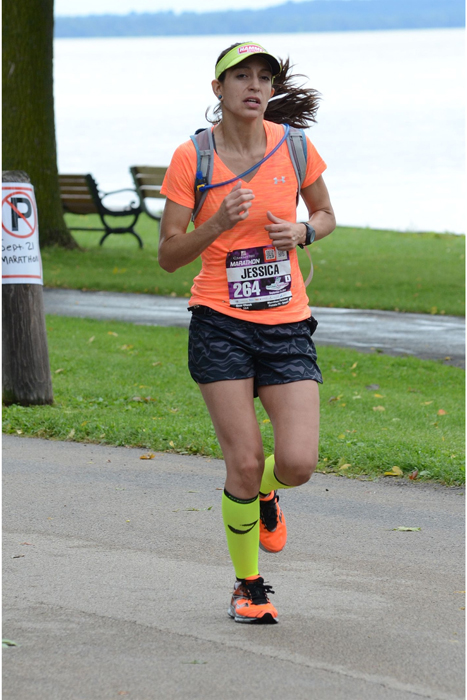 “IF my brain is working right I’ll finish around 3:30:00… but HOW IS THAT POSSIBLE!?” I thought to myself “I’m going to qualify for Boston!”

“One more turn…” said a runner on the side of the road with a half marathon medal around her neck.  As we turned the corner, there it was, The Finish Line!  It seemed so far away at the time, but before I knew it I could Steve and Jason in the crowd cheering.  I gave them a thumbs up and shouted “I did it!!” I crossed the finish line at 3:30:37.  The thought of running anything near a 3:30:00 marathon was overwhelming but I had just done it… 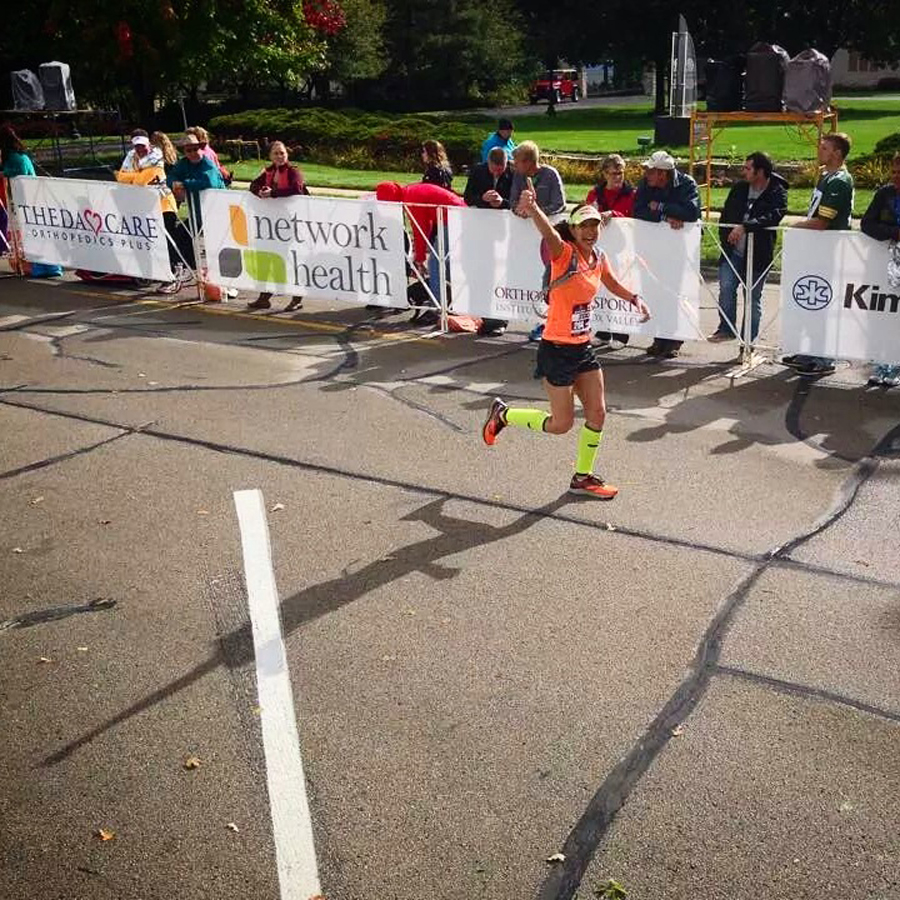 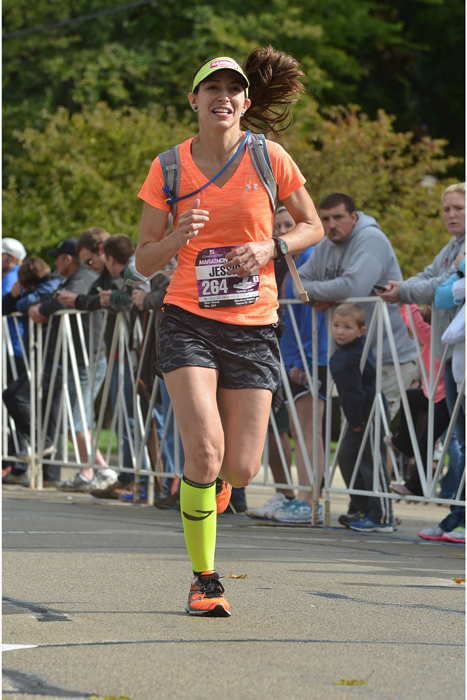 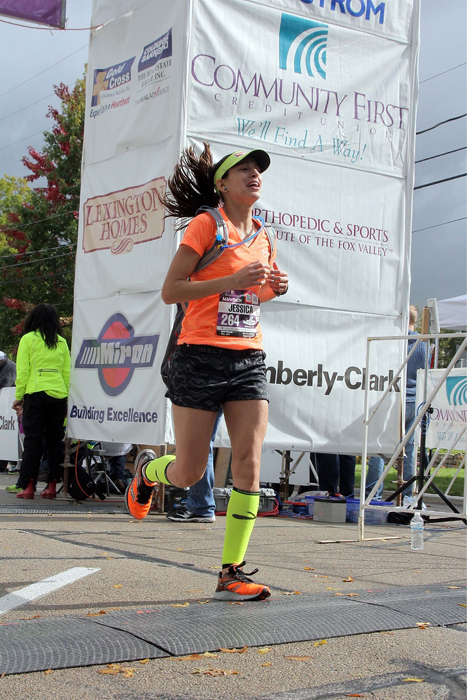 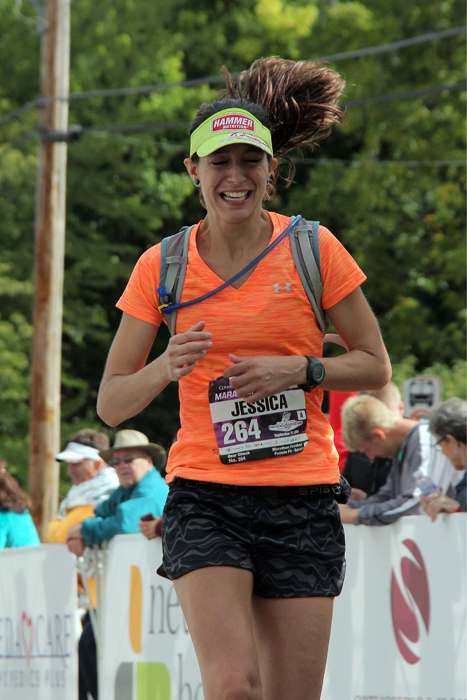 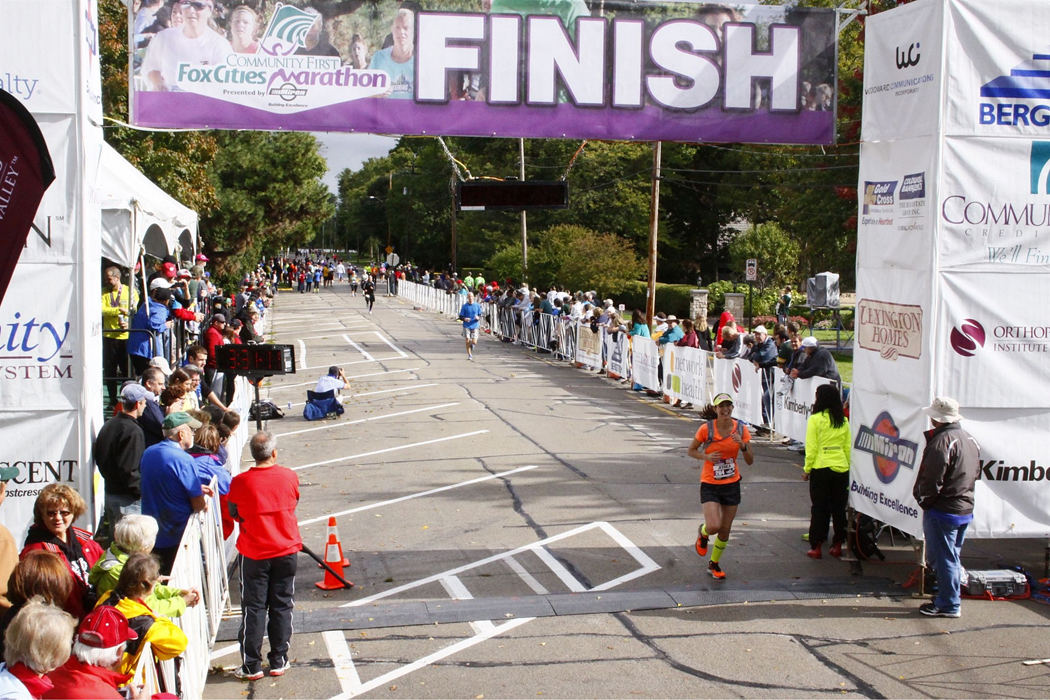 The course wasn’t the most beautiful, it seemed like we ran through a lot of run-down areas. However, there were a few really pretty areas over bridges and along lake Winnebago.  It’s a flat course with a few “hills” that are basically bridges.  One thing that sticks out wasn’t any ONE thing at all, it was the crowd support.  There were entire aid stations that dressed up.  There was a Charlie Brown aid station with  people dressed as Charlie Brown with music in the background.  There were also Super Heroes, Flintstones, Power Rangers, Minions, Harry Potter Characters and even Cheerleaders.  In fact, I high fived an entire pom group.  Then energy and positivity on the course was amazing! I’d have to say the spectators and aid stations were my favorite part! Toward the end of the race I had to dodge large groups of walkers which was tough on fatigued legs.

Nutrition wise I took in 4 Hammer Gels, 3 or 4 salt tabs, and drank nearly my entire camelback.  I’m so glad I decided to bring it because I didn’t stop at any of the aid stations.  The only time I came to a walk was when I cramped up at mile 22.  I’m also really glad I brought salt. I was very on the fence about it, but totally needed it. Every time I started to feel off or even the slightest bit of fatigue I took a gel and I think it really helped me get through this.

After such a hard running summer with my shin issues then my ankle sprain in July, this was exactly what I needed to start loving my run again. I can’t believe I’m heading to Boston 2016. Now let’s hope there is enough room for me to register…. and let’s hope my body holds up! 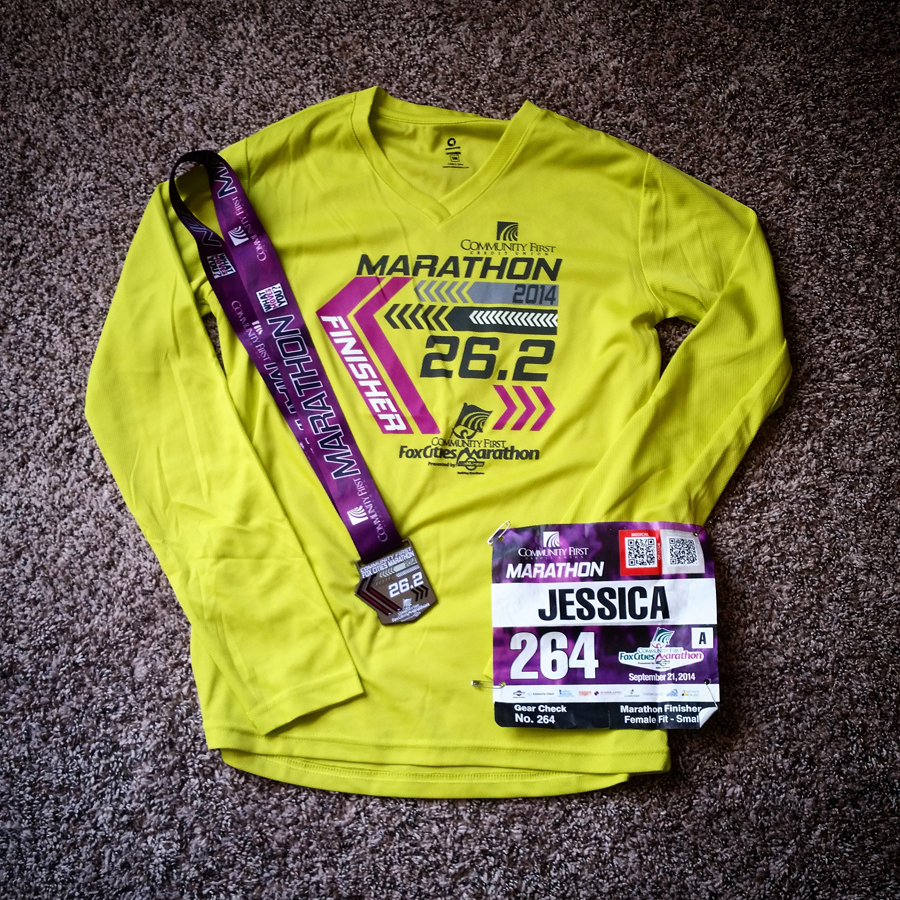 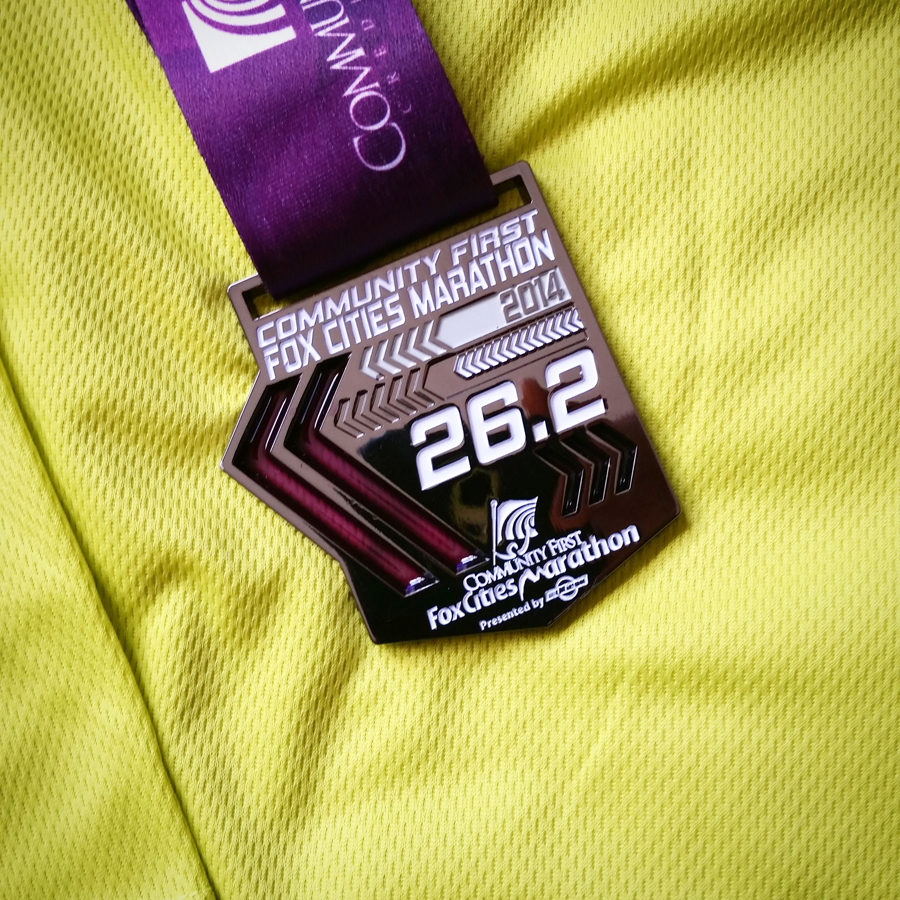