Her Madison Half Marathon 2016 – Race Report

I woke up early Sunday morning to raindrops, not just a few, a downpour followed by lightning and thunder.

“Well,” I said to Andrew, “At least I’m not running 50 miles in this stuff…” Last fall, Door County was exactly 50 miles of this, minus the thunder and lightning.

I checked for a storm delay on the Her Madison half facebook page to see that everything was on track.  The volunteers and race ladies were on track to be set up for us.

Andrew and I had a quick breakfast and headed up to Madison.  The rain seemed to clear right as we arrived and parked.  It was a race day miracle!

The Her Madison Half Marathon is a young race, but you’d never know from the experience.  2016 was the second annual running of this race and everything was right on target. The starting and finish lines were impressive, the medals were absolutely beautiful, and the race shirts were fabulous, but most importantly the volunteers, race crew and the runners were the sweetest people I’ve ever met at race.  Usually I say ultra marathons have the most welcoming people, but this race definitely was just as welcoming as an ultra.

The Her Madison Half Marathon is a all women’s race open to those who identify as female.  It’s a run to celebrate the journey that women take to run and better themselves.  For a lot of of women, it’s more than a race, it’s a symbol of commitment and strength through not only running but also life. I was actually a little worried about signing up for an all ladies race, but I was pleasantly surprised at how great the experience was.  Turns out, girl power is really uplifting!

So, what was my plan and my goals for this race?  Well for once, I didn’t have many plans.  I didn’t have a goal finishing time and honestly, this race was practice run for the Madison Mini in August. I’ll admit, I SUCK at pacing myself.  I SUCK at starting easy so Kitty gave me some splits to aim for.  Let’s just say I was little off.  Kitty might say a lot off, but I seriously tried.  I always get caught up in race day excitement. 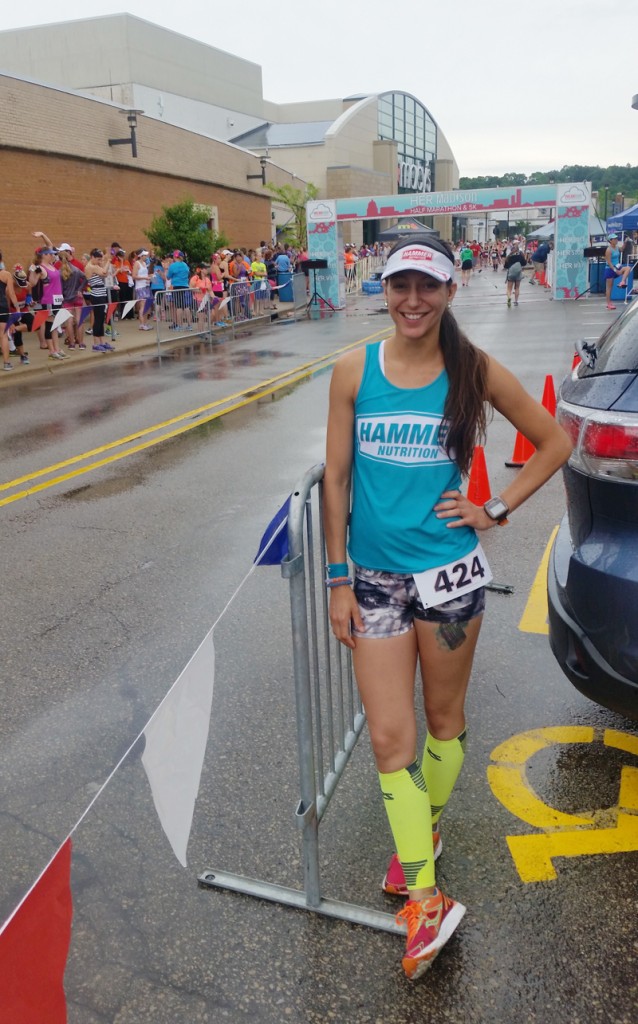 Her Madison Half Marathon 2016 Start line

Coach Kitty suggested I start with the 1:40 pace group, there wasn’t one, so I started with the 1:45 group.  I felt really strange starting right at the front of this race.  I took a Hammer  Endurolyte Extreme Salt tablet about 30 minutes before the race and a Hammer Gel 5 minutes before.  I planned to take the Gel 15 minutes before but got completely distracted and forgot until I was at the starting line.

The race started and I ended up with the 1:45 pack as we weaved out of the Hilldale Shopping center.  The alloted space for runners to run through was small and we were funneled together quite a bit in the few moments after the start.  At the start I kept looking at my watch and stayed behind the 1:45 group and eventually I found myself pulling ahead of the 1:45 group.  I heard a friend yell “Go get em, Jessica!” as I pulled even more ahead of the group. 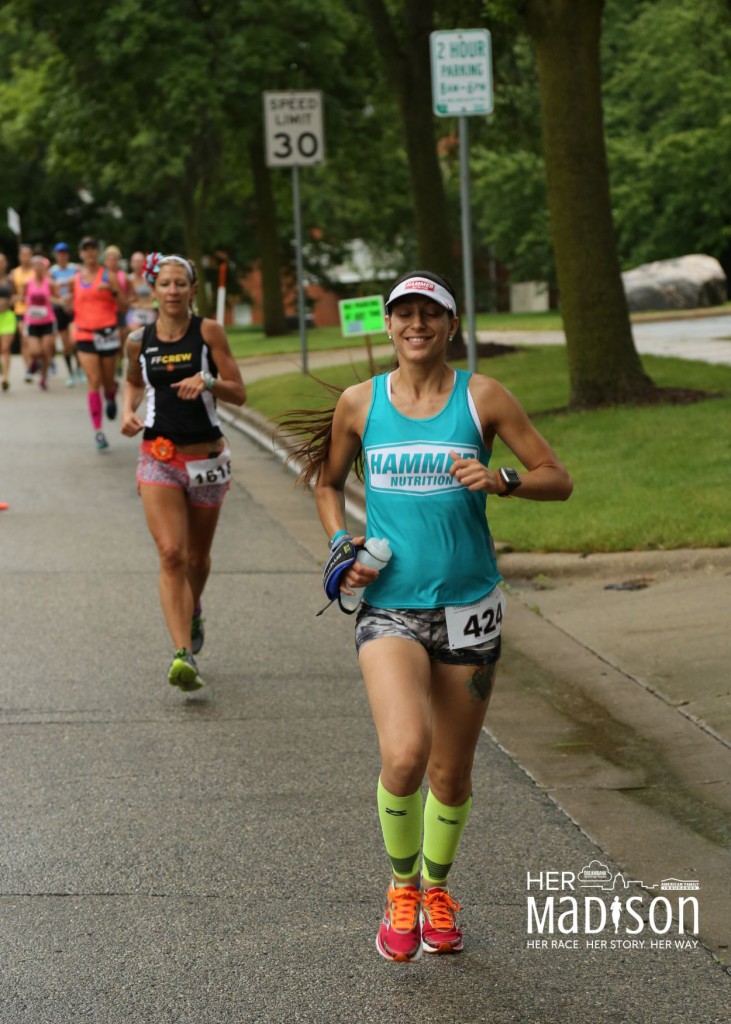 Even though my eyes are closed, this is the best smile!

There was one woman in front of me, and one behind me.  I could hear her garmin beep every mile it seemed.  This is about the time that I got in my own head.  I watched my current pace, which can be frustrating as it tends to jump around.  One second it’ll say too fast, another second it’ll say too slow; It’s hard to be JUST right.  Eventually, I stopped paying attention to it for a while and just ran by feel.  I did a lot of talking in my own head.

Can I sustain this?

Is this too hard?

I should slow down…

I felt really good so I just ran.

I started struggling with the humidity on the first big hill, Observatory hill.  This was also the first moment I started walking.  I knew I was getting hyped up about being 2nd and I knew I needed to stop.  I got about half way up the hill when I needed to walk, I heard the 3rd lady come up next to me, she handed me a little orange flower and said “Come on, We’ll do this together” and she pushed me up the rest of that hill.  We yo-yo’d a bit, she was steady, while I needed walking breaks, eventually I didn’t see her again til the finish. 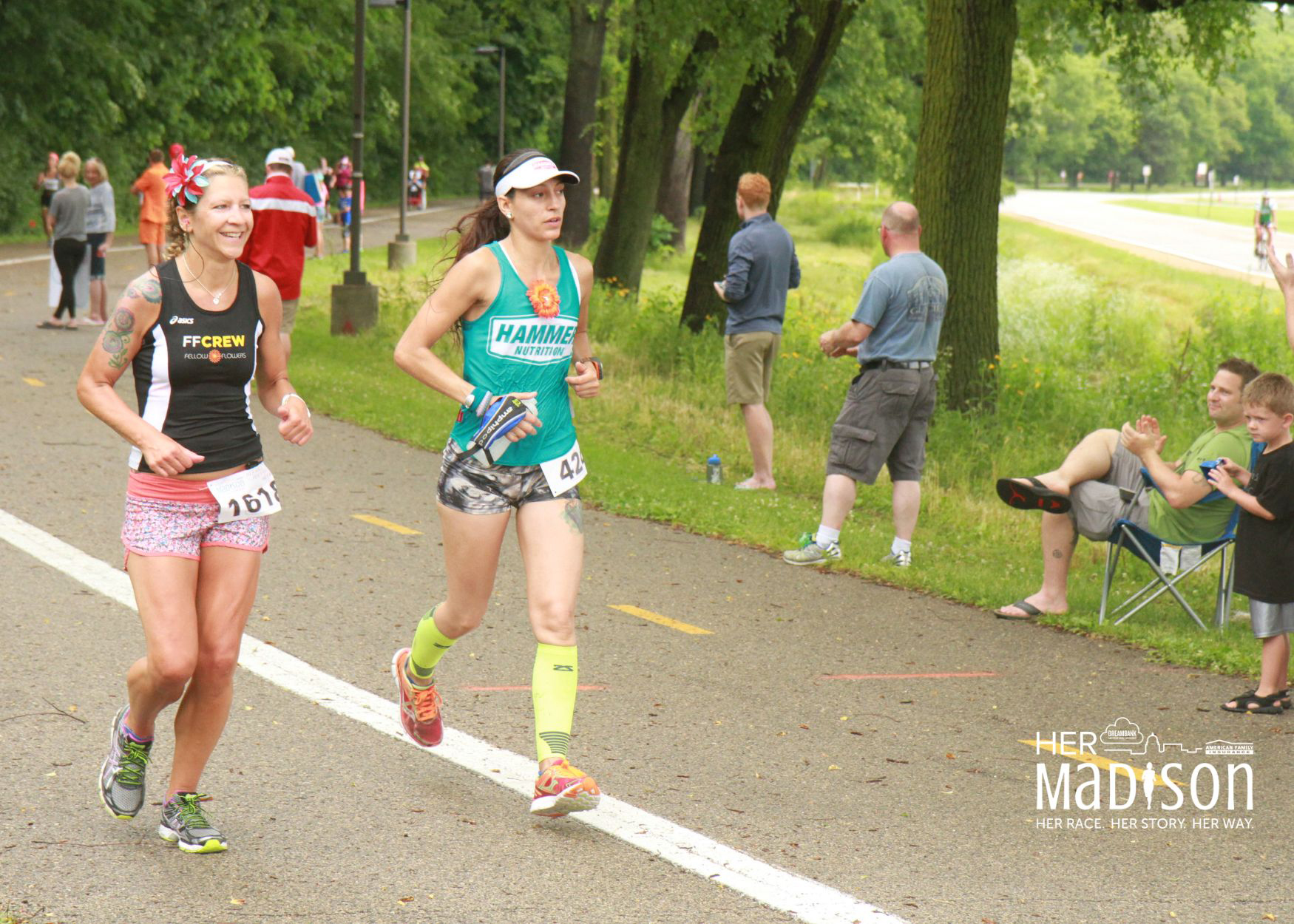 From that moment I threw aside my place and tried to run MY race, MY plan, My best.

Unfortunately, that plan didn’t change the humidity and the heat of the day and I struggled on and off for the next 7 miles.  Hills are still my weak spot, heat and humidity still destroys me, and it always seems to become a race to survive.  I ran up hills half way usually and took walk breaks when I needed and ran hard when I could, but I was saving some for the end. I wanted to run hard the last two miles, but another hill, beat down my pace, so I ran the last mile hard.  I knew I could do that! 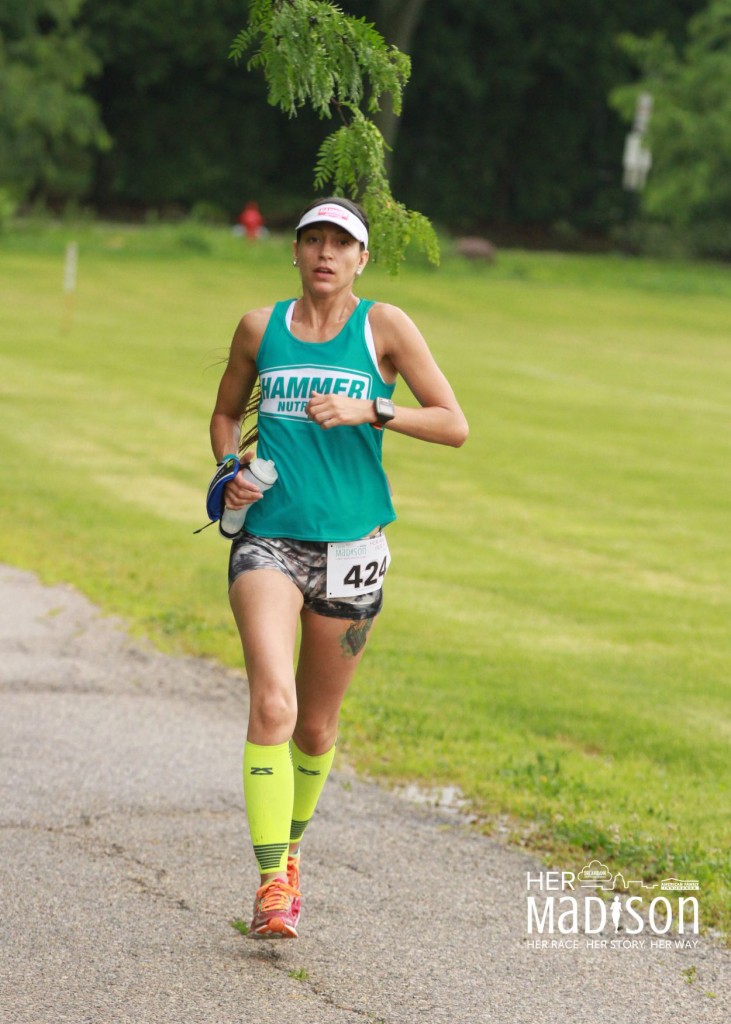 At the last aid station the third lady ( a new face) came in with me.  I poured some water over my head and in my bottle and said, “let’s do this, lets run in strong.”

I picked up my pace, we had just run our last big hill and it was time to finish hard.  At this point ladies from the 5k run and walk and the half marathon walk were EVERYWHERE.  I had been weaving in and out of people for a good chunk of the race, but this was even worse. 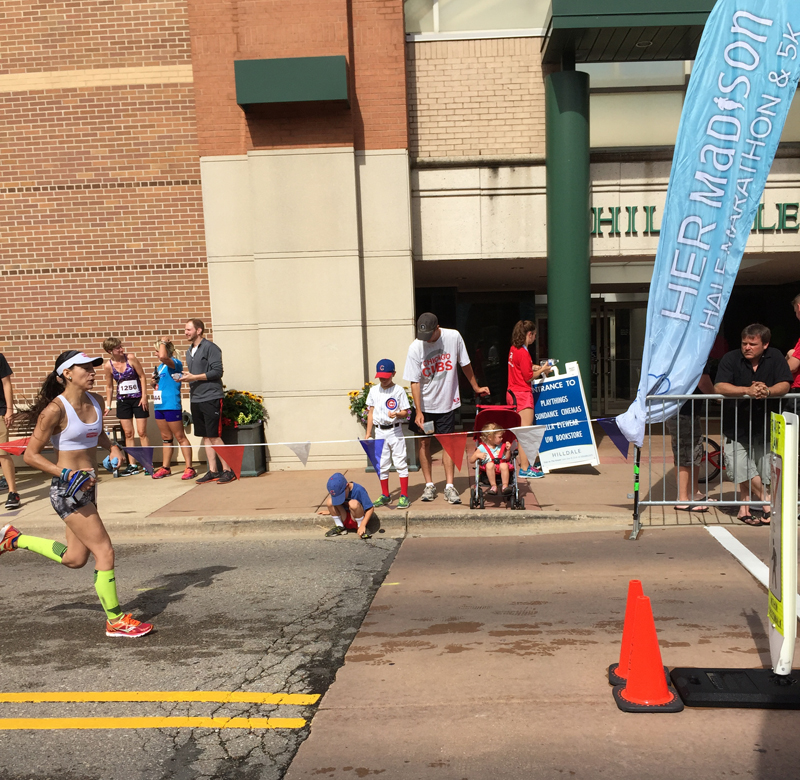 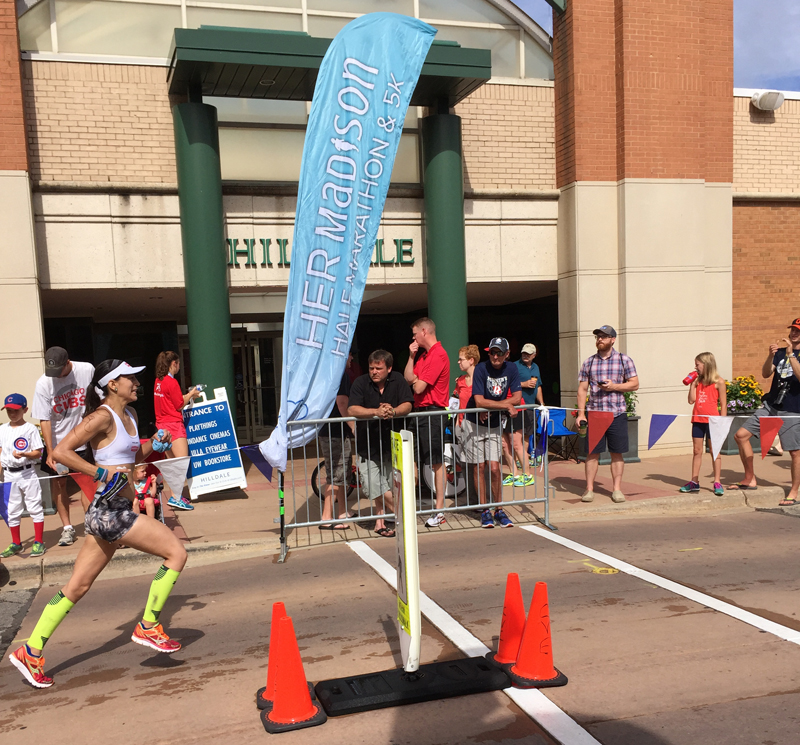 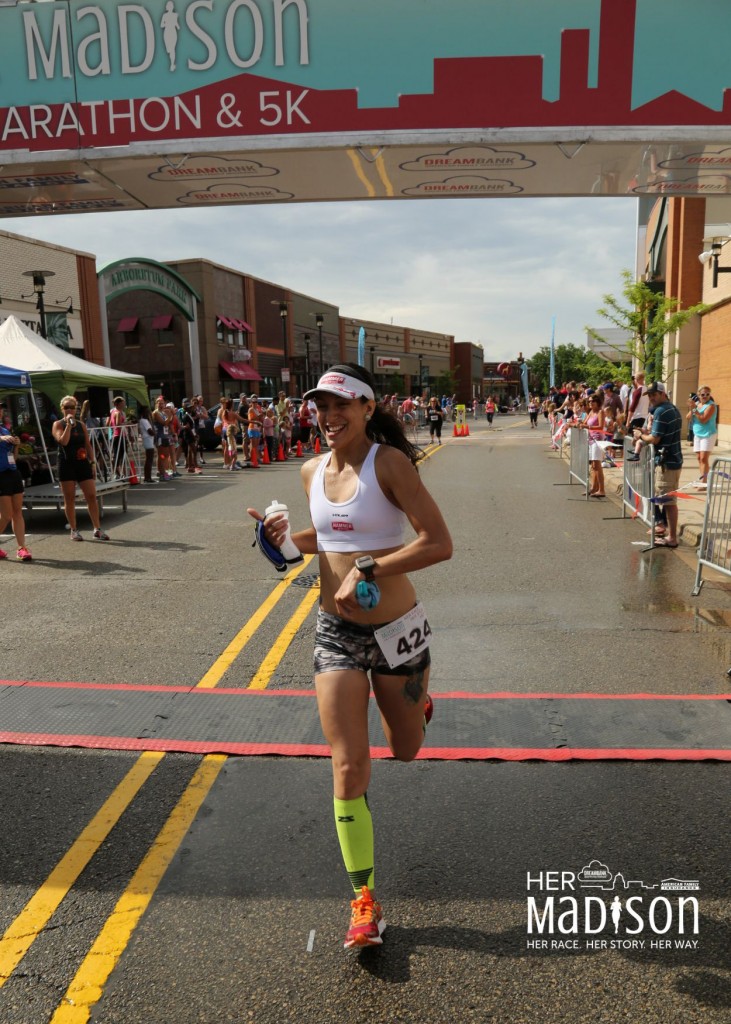 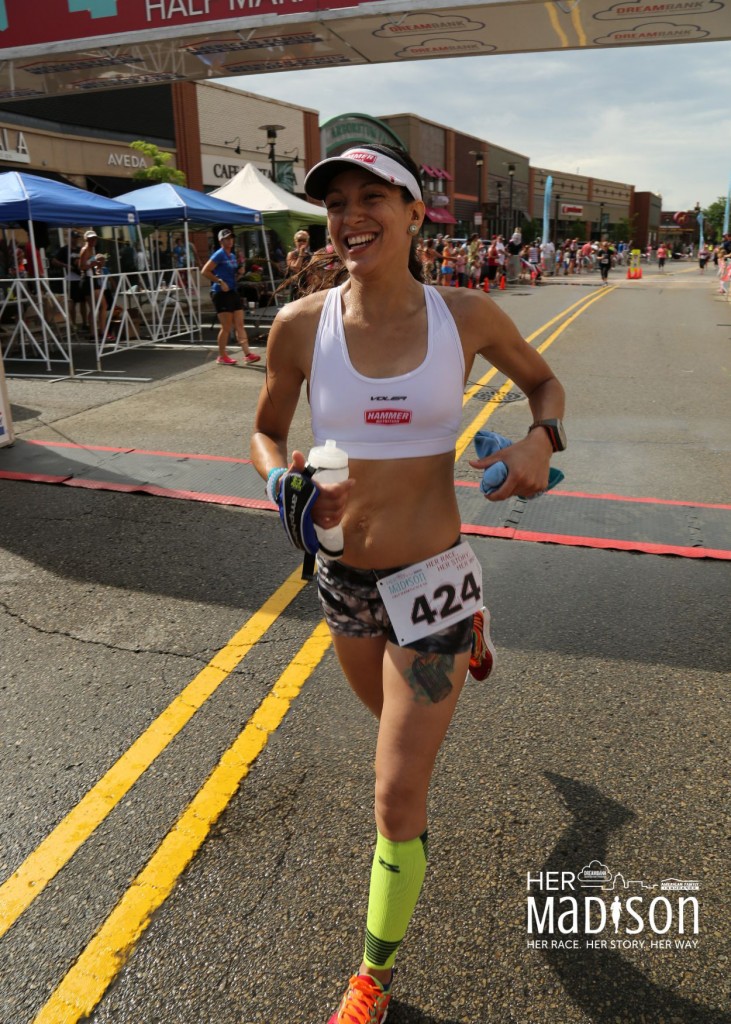 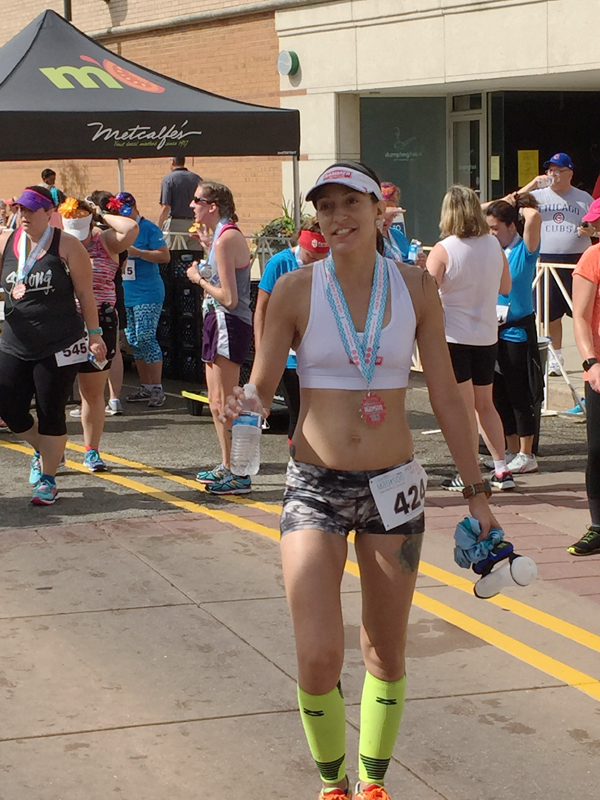 All Smiles at the finish line.

The finish line was hopping, the announcer was dancing and congratulating women as they crossed the finish line. I ran as hard as I could to the finish line and it felt great!  I finished the Her in 1:43:02 as the 2nd overall finisher. No PR but considering the conditions, I’m super happy with this.  I guess I can fight the humidity after all.  I didn’t hit my pace targets, but that’s something I’m still working on (seriously coach, I tried!). I think a big part of it is overthinking.  It gets me every time!

This was such a fun race, that I KNOW I’ll run it next year! It’s definitely a bucket list race for the ladies! I’m excited to see it grow!! 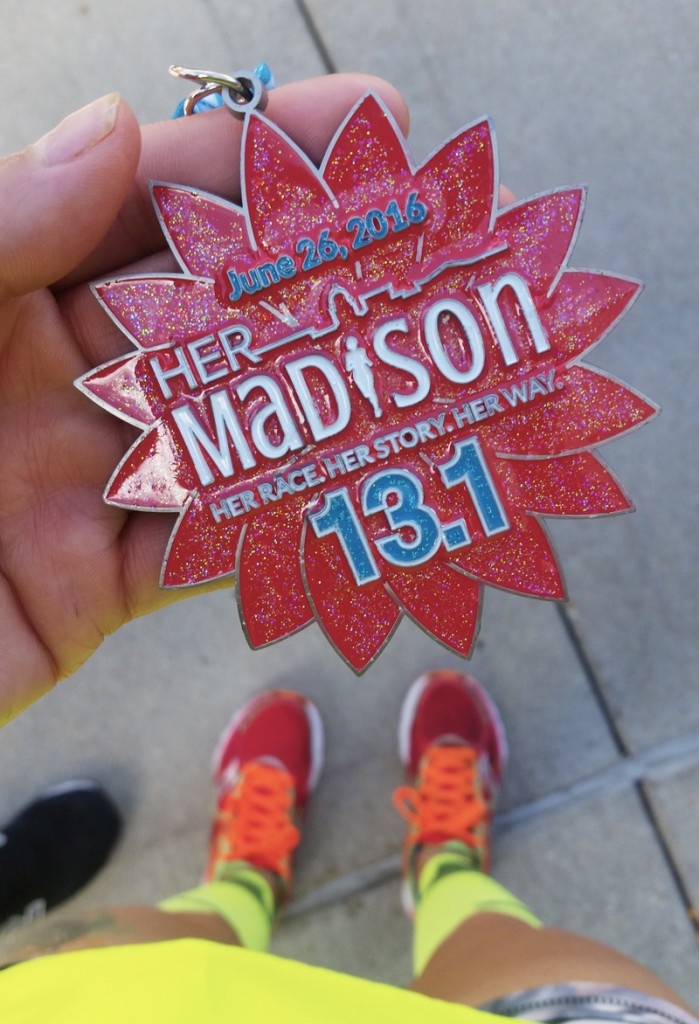 Her Madison Half Marathon Medal

← Finding my way
Starting your running journey… invest in yourself →