First of all, I’m struggling and having a hard time writing this. I want to tell you I had an amazing trip and that the race was simply magical but only half of that sentence is true.  The trip out to Boston was a good one. I was able to spend lots of time with Andrew and Hailey.  We got to explore the East coast a bit and that was GREAT.

The race was another story.

In the days leading up to the race my legs felt heavy.  I was tired, just tired but oddly enough, I’ve never slept so well in my life. We found a cute lil bed and breakfast in Westbourough called the Westburough Inn.

Even though I was excited about all the excitement of boston, huge crowds of people make me nervous. I’m not a huge fan of big cities and big city driving. Maybe it’s a control thing, but I hate feeling out of control and that’s what big cities do to me. So the idea of traveling to this big unfamiliar place had me nervous and torn about how I should feel about Boston.

Our bed and breakfast was about 40 minutes away from downtown Boston. I didn’t think we’d be driving into Boston almost every day, but that’s what happened. It was nice to be able to get away from the busy-ness of the city at the end of our adventures but the trip wore on us over time.  That was probably another reason we were sleeping so much.

Our bed and breakfast was amazing.  I’ll admit I put off reserving a hotel until about a month before.  I was extremely overwhelmed with the whole process of planning for this trip and race, so in a true Jessica fashion, I ignored it. Until, I couldn’t ignore it anymore.

Andrew and I sat down and looked at different area bed and breakfasts together after Coach Kitty suggested I look into them.  After a little bit of searching we found one with KITCHEN access! That’s right, a full kitchen with a stove, microwave, toaster and fridge.

One of my anxieties is always food. What am I going to eat while traveling as a vegan?!?! Being able to buy food for the week and cook it was a big bonus.  After we got checked in, we headed to a grocery store and I was able to buy quiona and coconut milk for my morning rituals.

While the decor of our bed and breakfast wasn’t exactly current or classy it was still great.  I had NEVER slept as well the week of a race in MY LIFE!  When we first checked in, I laid on the bed and was instantly worried. The bed was ROCK hard.  I struggle sleeping on beds that are too firm.  To my surprise, every night in Boston we slept 8 or 9 uninterrupted hours, and we could have kept going. So when I awoke on race day and my legs were heavy and tired, I was worried.

Boston is complicated but at the same time very easy.  After 120 years the Boston Marathon race directors and planners have it down to a science.  I’ll admit, I felt a little lost but I’m sure most first time Boston runners feel the same way. 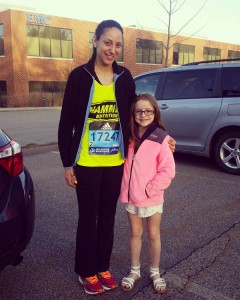 Marathon Monday Andrew dropped me offat the runner drop off area at 7:00am.  Since there was no runner drop off at the athletes village I had to be dropped off at a parking lot about a mile away. I must have chosen the wrong bus because our driver got lost and we ended up on the bust for 45 minutes!

My wave was assigned to start at 10:50am which means I had plenty of time to wait even though our bus driver drove us around a bit.  I felt a little strange being by myself but I tried my best to take in the sights and moments at the Athlete’s Village.  There was a steady flow of busses and people coming in as we arrived.  I was amazed at how many people were there! 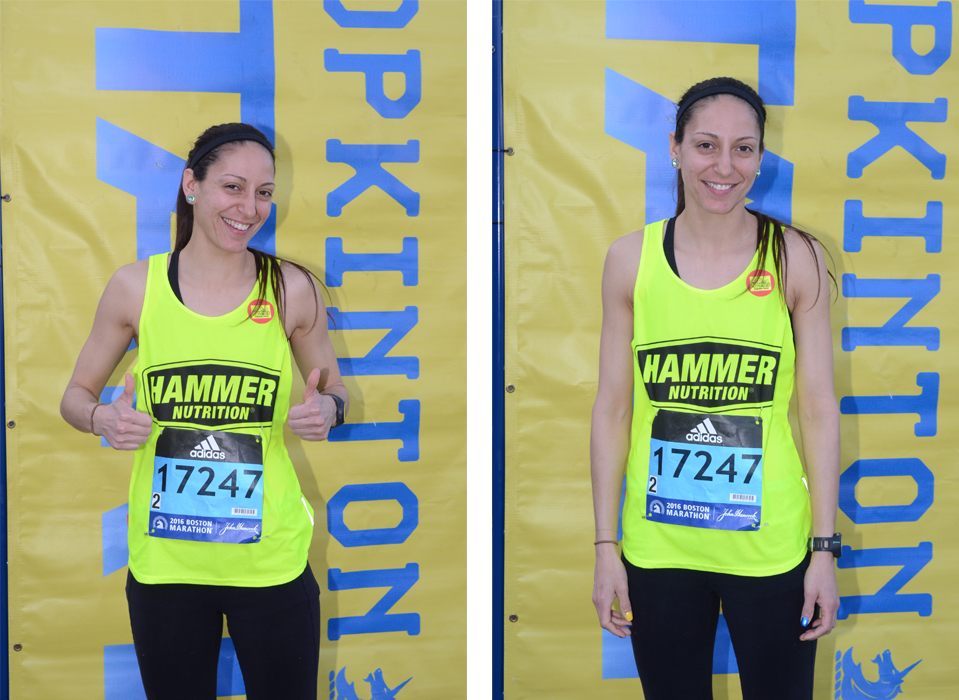 I ended up finding a spot in the sun and sitting around watching people file out of the Village. I ate my snack about an hour before my wave was supposed to start.  I still didn’t feel like I was ready to run a marathon, but this was it, Boston was here, and I was damn well going to have a good time.  I chatted with a few runners to pass the time and before I knew it, the announcement for my wave to head to the startline was here. It was time for the walk.

We were herded like cattle to the start line.  Metal gates lined the road for a mile or so.  I imagined this part would be crazy, with people shoulder to shoulder walking to the start line… but it wasn’t like that at all. I had plenty of space! As we got closer to the starting line, there was another section of port-a-johns.  My wave was stopped and we waited for a short time before we could head to the starting corrals. When the volunteers were ready for us we were allowed to head to our corrals, but we couldn’t go in just yet, The wave before us was about to take off.  This is the point that I felt crowded but really the ONLY point.

Our wave watched the group take off and then we filed into the corral and got pumped up with announcements and finally after hours of waiting we were off.

Shortly after starting I thought, “I’m just hot!” I exhaled a big lions’ breath as I do in hot yoga.  Hopkinton was 70 degrees or so and I stupidly sat in the sun waiting for my wave to start. The first few miles was nothing but me fighting the heat, my mind and my ego.  I was going through things in my head over and over.

“I just don’t feel good today.” I thought to myself. Like I said before, my legs were tired but that wasn’t all.  My tummy felt heavy and my core muscles felt tight. I felt like I did an hour of core work the night before the race.  Usually it takes me a bit to warm up, so I hoped by 5 miles I’d feel better.  5 miles came and I didn’t feel better. I knew I needed to slow down but I physically couldn’t get myself to slow down.  Mentally, I was telling myself to slow, and I thought I was, but every mile was just around or under 8:00 minute miles.  Until I finally decided I’d done enough.  I couldn’t completely destroy myself at Boston.  At mile 8 I slowed to an 8:30 pace and it was all downhill from there. I still didn’t feel well and I still wasn’t warmed up and I knew that all of my friends and family watching were going to watch me fall apart.

At this point, physically everything was off, and mentally I was fighting also.  Pulling myself out of the race NEVER crossed my mind.  I was going to finish Boston, I didn’t come this way to drop out no matter how long it took.

By mile 13 I had dropped to near a 9:00 minute mile.  I started calculating my estimated finishing time and I kept getting more and more discouraged, especially since I was putting out all the effort I could. I started walking for a bit and then running for a bit.  This wasn’t about racing at all, it was about surviving.

It was so difficult to keep my mind busy at Boston, thankfully I had a lot of spectator support.  I gave young kids high fives for miles and miles. I took advantage of the crowd’s energy as best as I could, but really I was just trying not to cry.  Boston is so HARD.

As I ran, I kept thinking, “It’s ok, we’ll see how we feel at mile 20 and if I’m good, I’ll run hard the last 6.2 miles”.  As I approached mile 20 I started to cramp in my core.  I never cramp… NEVER EVER cramp. So instead of running hard, I ran a little and walked a lot.  Basically my Boston Marathon race looked more like an ultra marathon and if felt like it too. 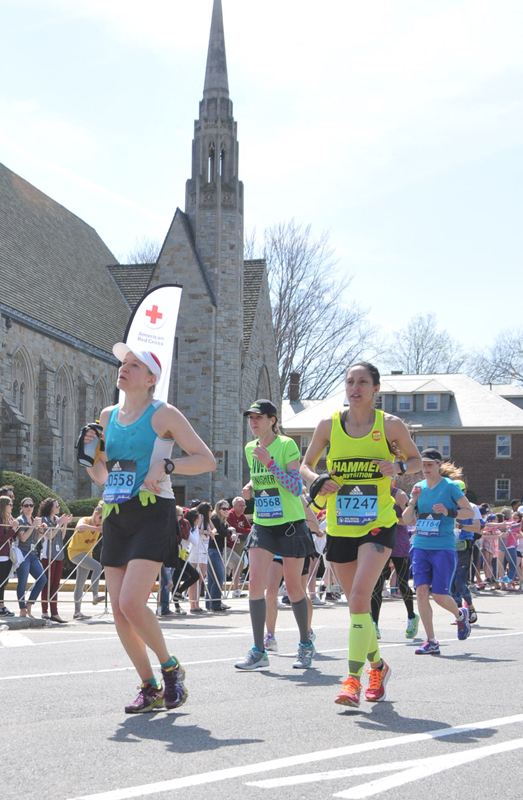 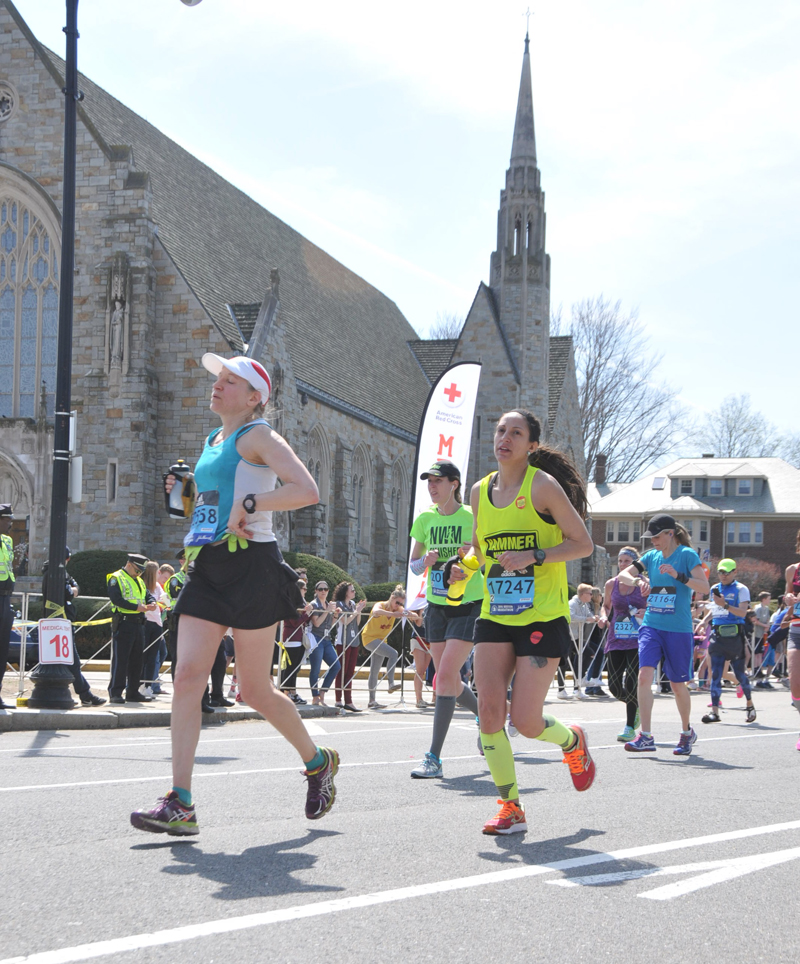 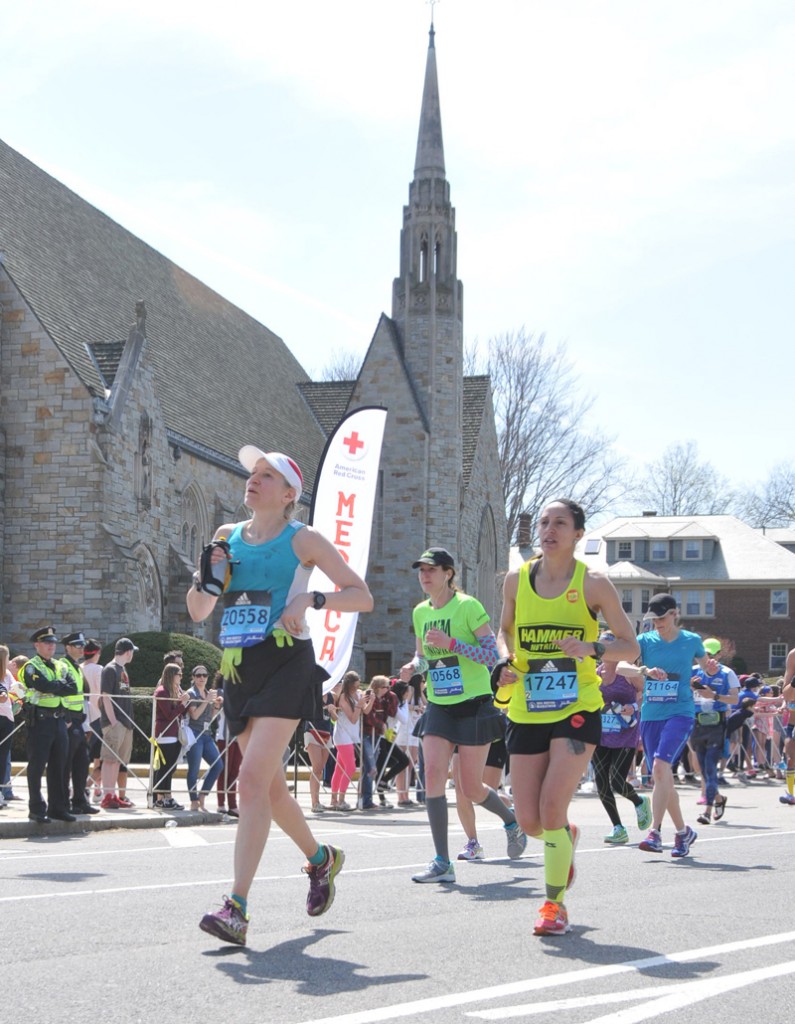 I tried so hard to be positive, but I couldn’t find any positivity in myself, instead I looked to the crowd for distraction. That’s all I could do. I was beat and destroyed. I felt like I couldn’t even enjoy the course because my mind was so negative.

I knew that when 3:30:00 came and then 3:45:00 and finally 4:00:00 went by that my family would worry.  Even though I felt like I was running with a dark cloud over my head, running into the city was great.  The architecture was amazing and the crowds were out of control with energy.  I was excited to be done, to eat, and to just be still.  I had given it my all and it was truly a battle.

Andrew, my parents and Hailey were in the crowd just before the finish line, cheering at a gate to the left.  I heard Andrew yell my name as I passed them, Hailey was up on his shoulders.  It was almost a comical moment seeing them with so much happiness.  Finishing Boston was such a relief.  The moment stopped running and started walking my calves began to throb.  I always forget how much road races HURT. 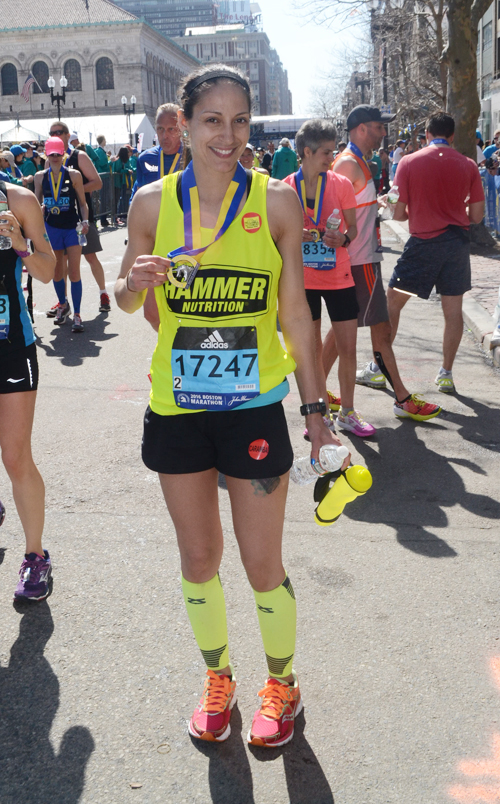 The finishing process takes a while.  I felt like the finishing chute went on for miles. I was given a medal and goodie bag and hobbled to the family meeting area.  My family had a tough time getting to me because they were on the other side of the road and had to go all the way around but eventually they found me sitting on the curb. As soon as I stood up to greet them my stomach dropped.  I let my parents snap a few photos before I felt like I was going to vomit.  I sat down on the curb with my head down hoping to settle my stomach. After about 5 minutes I attempted to stand again only to sit on the curb for another few minutes.  Eventually, we started walking to the car but I had to stop another time to sit for a moment because of nausea. Finally after the 3rd stop I was able to hobble to the car. This is the moment I wanted happiness, I wanted hugs and congratulations but I wasn’t able to enjoy that finishing moment. 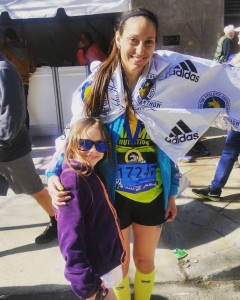 I felt a lot of things after the race but I wasn’t proud.  I was disappointed. Boston wasn’t suppose to be like this. I didn’t expect it to be a magical day of running, but I was hoping for that.  With the amount of happiness, support, and love surrounding me I thought it would have been different. In the weeks after Boston, I still felt defeated and I lost my love for running.  Eventually it’s come back, but I felt pretty lost for a while.

Boston wasn’t at all what I expected and I’m not sure why. I had a few road bumps in training and but I had some really great training runs.  Maybe it was all in my head and my own ego? Maybe I was over-confident? 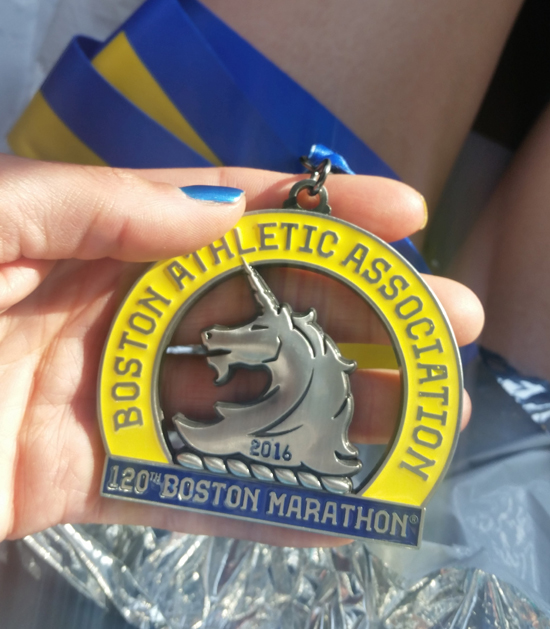 Either way, feeling this way about Boston has motivated me to go back, so one day, I’ll be there and maybe next time I’ll do it right.

If plan A didn’t work, the alphabet has 24 more letters.