In December of 2014 I had two hernias repaired. After my surgery, I decided that the Lakefront 50k along Chicago’s Lakefront path would be a good race to build up some mileage. Even though most of my larger late spring races would be trails, I liked the idea of a nice flat road race. I don’t often race the 50k distance and when I do it has always been on trails so I thought that it was about time for a shiny new PR.

I’ll be honest, in the months leading up to the race my training has been sidelined. I was able to get my back to back long runs in, but there were weeks that I had to put running on the side because of some HUGE changes that I was going through in other areas of life. So, unfortunately my weekly mileage was down, but I was feeling really great for my long runs. My last back to back long run was especially promising. 25 miles on Saturday followed by 10 miles and then 8 hours of work on Sunday left me feeling amazing – and my Sunday run was much FASTER and felt better than my Saturday run. I felt very confident going into this race – maybe too confident.

I’ve raced a lot of ultra distances and for a while I did an ultra marathon a month for 17 consecutive months, so I think I DID get a little over confident. In the realm of things, 50k isn’t THAT far right!? This thought process kind of got the best of me. I honestly didn’t even get nervous for this race, which is very uncommon. Usually I get very anxious as race day approaches. For some reason, I just FELT that that this would go well… until exactly 1 week before race day.

I woke up with a scratchy throat. Hoping that I could kick it in 7 days I did everything I could to feel better. I stocked up on some meds, ate some extra nutritious stuff, and rested my body for the entire week. SERIOUSLY, THAT WAS HARD. I did a short run Monday morning and rested the next 4 days, hoping that ZERO exercise stress would help me recover from whatever I had. By Wednesday my scratchy throat had turned into a full out cough along with some congestion and pressure in my ears. It was no use, I was sick and it was going to run it’s course no matter what. I continued to do what I could, but still getting very little rest, with my cough keeping me up all night. It was a miserable week for me, but before I knew it, Friday was here and I was still coughing.

Friday felt crazy. I had a lot to get done before the race. I felt like my apartment was literally falling apart, and it was… But somehow I got distracted enough to make pancakes and do a million other thing that were NOT a priority. I finally got out the door and on the way to Chicago by 2:44pm – yes 2:44, for some reason I remember the 44 part.

Anyway, the drive flew by and I made it to REI to pick up my race packet. The “race packet” was a simple race bib and a t-shirt. Usually, races give out bags of goodies, but this one was nothing fancy which didn’t bother me at all – because really, I don’t need another cloth bag or random water bottle. My number, however, was magical. Bib number 228 – Magic because I’m 28. Maybe that’s silly, but it felt good. I got a bite to eat and headed to starting line to scope out parking. Of course nothing was set up but it was nice to see what the drive would be like in the morning and OH. MY. GOD. did that drive suck. It seemed like it took an hour to get from the starting line to my hotel. I decided a little extra time in the morning would be great. 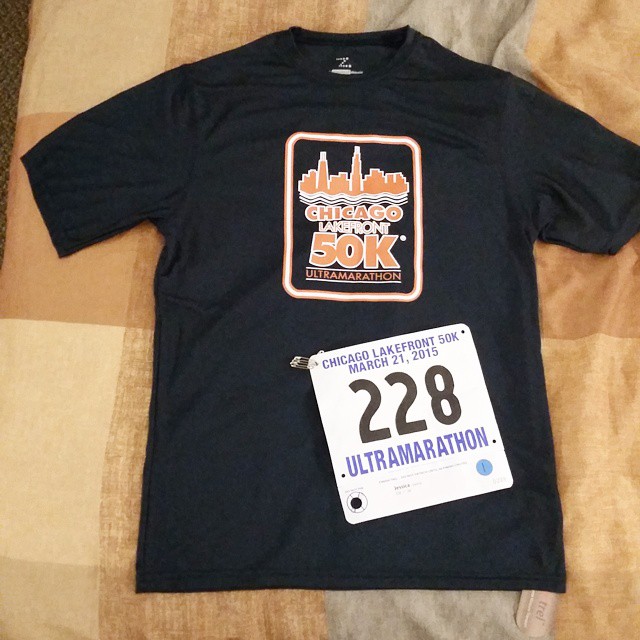 Once I got checked into the hotel, erhhhhmmm, motel (which I didn’t expect), I got everything set out for the next day. I wasn’t sure about clothing because the weather was tricky. The day called for temperatures between 35 and 47 degrees with winds around 14 mph. I finally settled on a long sleeve shirt, shorts, and calf sleeves. I finally headed to bed around 10:00 PM and actually got a good night of sleep compared to the entire week leading up to the race. 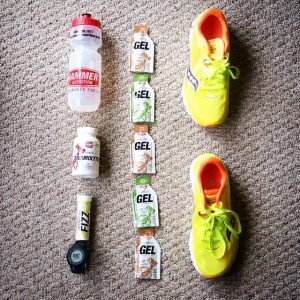 I woke up around 6:00 AM and had my normal oatmeal breakfast before the race. Instead of one serving I had two and washed it down with some water and Hammer Endurolyte Fizz. I headed to the start line just after 7:00 AM. Traffic was no problem at all, in fact I kind of like Chicago streets when no one is on them. I arrived just after 7:30 AM and hung in the car before visiting the port-o-john, I’m glad I did then because by 8:00 the line was pretty long. The whole morning was pretty relaxing which was really great I felt calm and ready and I guess a little bit excited!

The Lakefront 50k takes place along Chicago’s Lakeshore path and consists of 3 five mile out and backs. The location is great because there are nice views of the city and lake. The Lakefront path is a very popular area and remains open to the public for the race. 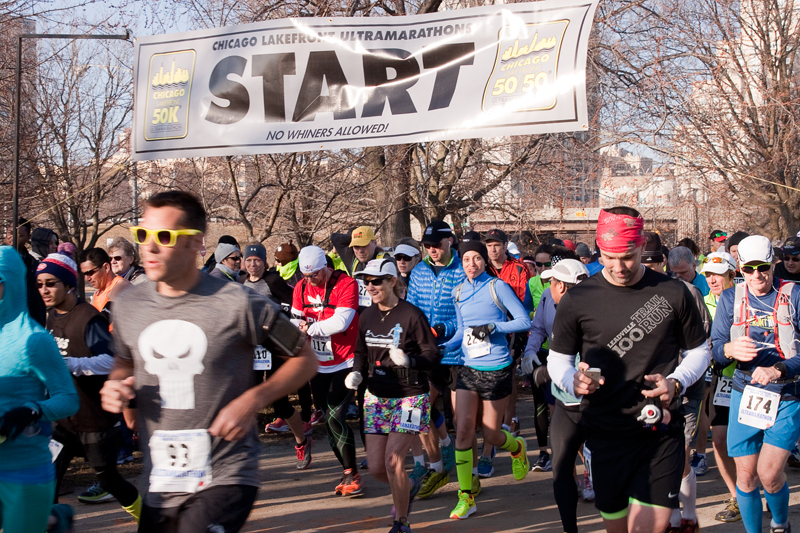 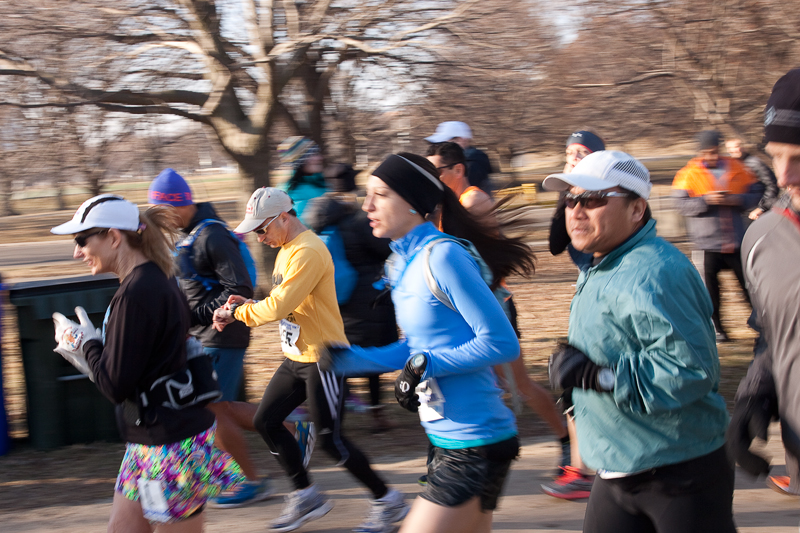 Around 8:20 AM the race director chatted a bit and by 8:30 AM we had started. My plan was to take it easy for the first two out and back sections and then push it at the end. I didn’t follow my plan at all! I was extremely excited to run fast. Since starting MAF training I haven’t run anything fast in a while. My first mile I held a 8:15 pace and basically went crazy from there. I was feeling good, the wind was to my back and I knew it was going to be a fight back to the start/finish line for the next out and back.

Just before the turn around there was a very sandy section. The wind blew sand around so much that I could feel little stings on my legs where the sand was hitting me. I ran through the turn around and didn’t stop at the aid station. The wind about stopped me in my tracks and I felt like I was moving in slow motion. My legs felt heavy and my eyes started to water. My pace slowed down from the 7:20s to right around an 8:00. SOMEHOW, for that first trip back I was able to stay around and 8:00 minute mile. At this moment, the race seemed much harder. I knew fighting that wind was going to take a lot of energy. Instead of “taking it easy” for the first two out and back sections I decided to run the out’s fast and the backs easy. 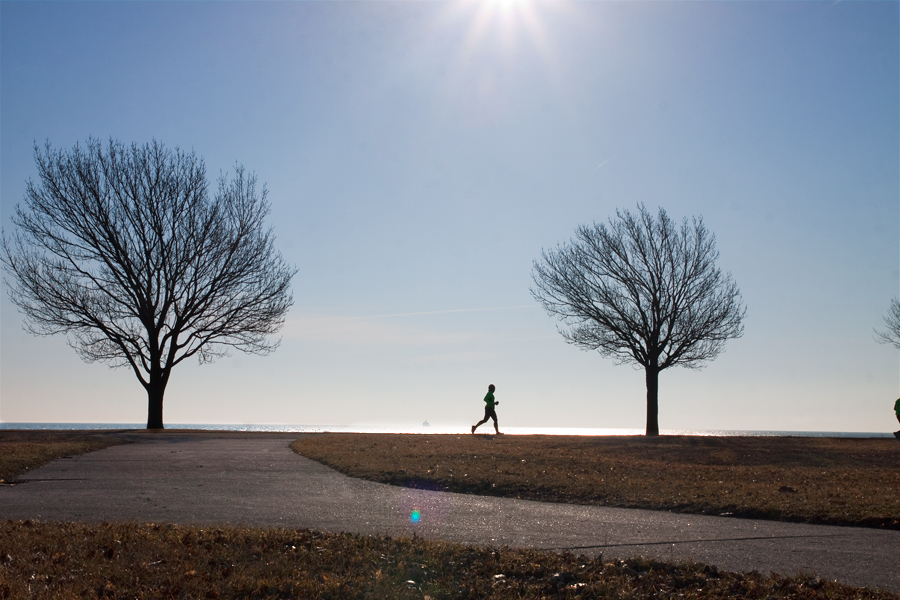 I pushed the pace when the wind was at my back and just tried to survive running into the wind on the way back. To be honest, I didn’t race smart. I pushed beyond my limits because I felt so great running. Still, the first two out and backs felt AMAZING. It was really great to run fast again considering I’ve been holding back so much. I was easily below 8 minute miles for the outs, even running as fast as 7:08 (what the hell was I thinking?) for a mile, with most being between a 7:20 and 7:30 pace. I was feeling great and didn’t even feel like I was working that hard until I hit 20 miles. I stopped at the start finish to refill my camelbak and grab an extra HammerGel. My cold was also getting the best of me. I couldn’t stop coughing to even talk. 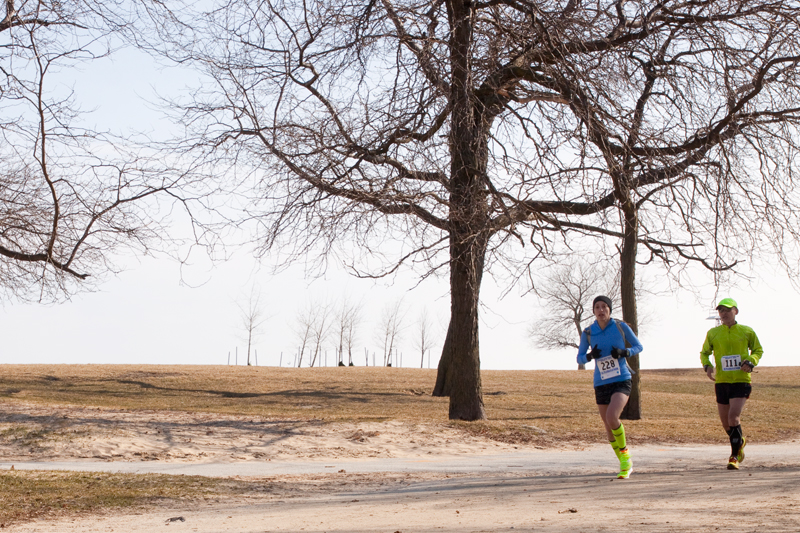 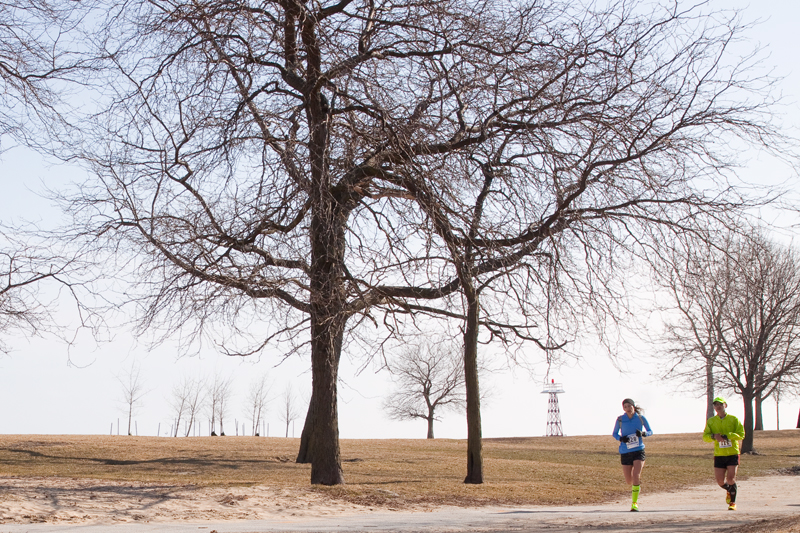 At this point in the race I was the number 2 lady with number 3 coming into the aid station. I headed back out and my legs were dead. I was able to stick around an 8:20 pace for the next 5 miles and I got passed by the 3rd lady around mile 24. Once I hit the turn around I was falling to around a 9:00 pace. At this point in the race I just wanted to survive. My legs were destroyed but the weird thing is I wasn’t upset or even negative at all. I accepted that my legs were beat and just kept running.

I really like this type of race because I was able to see EVERYONE multiple times. I loved the random smiles and “Good Job!” compliments I got. There were certain people I’d just get excited to see again. How weird is that? Throughout the race I found myself saying “Good Job!” and “Nice Work!” to a lot of people, toward the end of the race it popped out of my mouth almost excessively, even to people who weren’t running the race! I’d catch myself saying “Nice work!” to people on bikes on passing. I’m sure they thought I was crazy, heck I thought I was a little crazy but who cares right!?

I counted down the miles as the finish line got closer and closer. 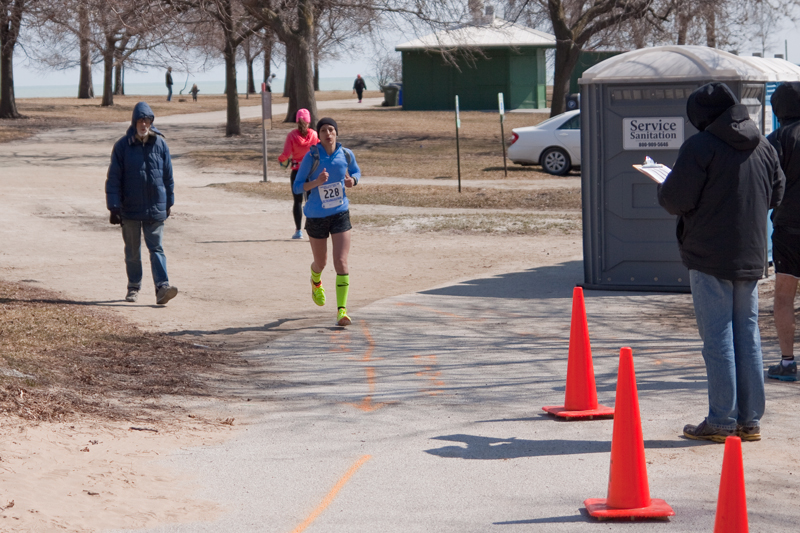 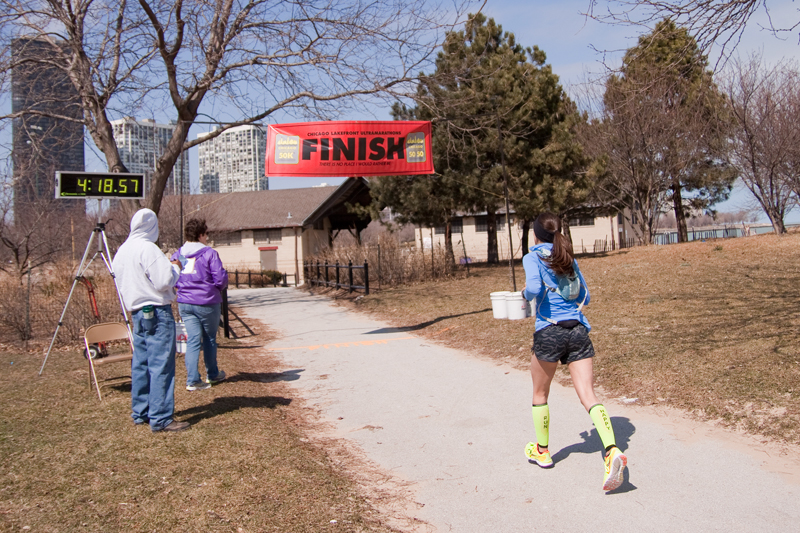 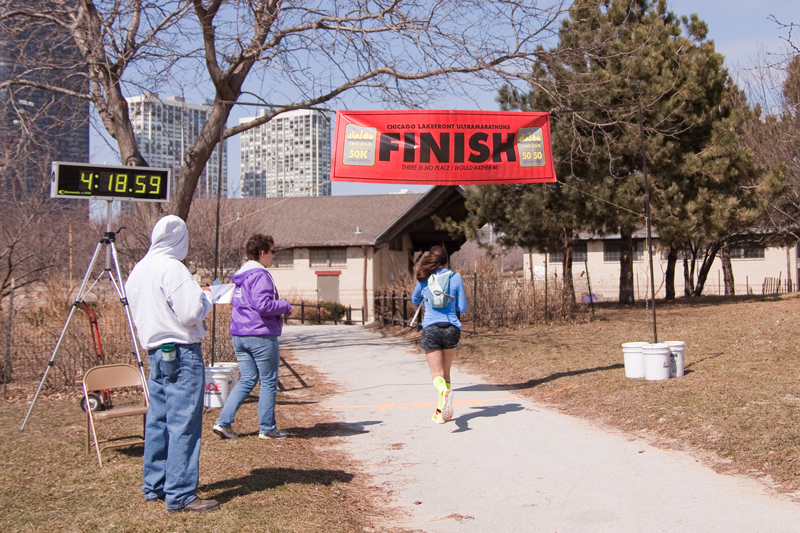 And finally, there it was! I was done and it felt like I had just started. Energy wise I was great, but my legs were wobbly. I still can’t believe how quick this one went!
The finish line was quiet. Only a few spectators were there cheering and a few people worked the finish line. I actually remembered to stop my watch right away this time! A woman took my bib tag to record my time and brought me a medal as I wobbled around a bit. A man working the finish line was concerned with my wobbling and offered me a lone medal folding chair. I sat for a moment and soon 4th lady ran in. She was close! I sat for a moment longer and wobbled to the car.

This almost didn’t feel like a race and I didn’t feel the crazy anxiety that I usually feel with races. It was a small and quiet race that felt like a long run… and I really enjoyed it. I finished up feeling strong yet broken. After all the ultras I’ve done, I still have some things to learn about speed and that’s ok.

Officially I finished in 4:19:00 – 3rd lady – 13th overall. Not too shabby considering my trail PR was just over 5 hours! Nutrition was dialed in! Obviously, Hammer Gel got me through this one. I had a mixture of Apple Cinnamon and Peanut Butter (which is amazing!). I had zero stomach upset and I was able to sustain my energy throughout. I had 4 Hammer Gels and Hammer Endurolytes during the race. Before the race I had a bottle of water with Hammer Endurolyte Fizz. Everything seemed to work without a hitch! 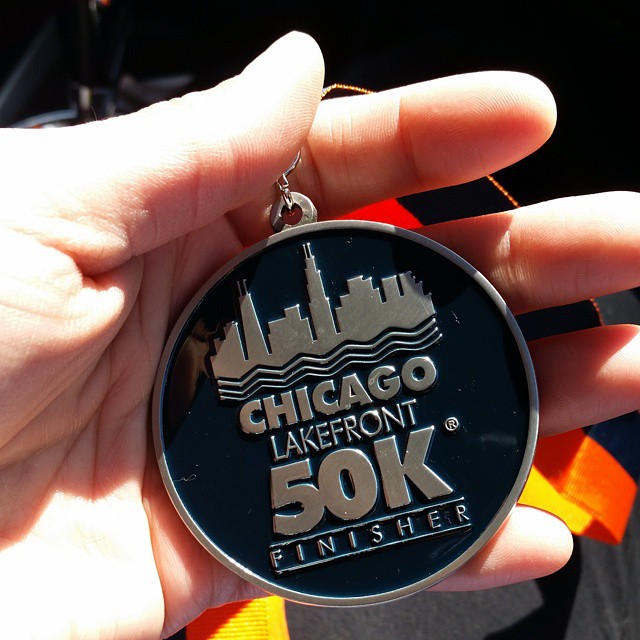 Now it’s time to take some time to look back at training make some changes and get serious. We got some big things to do and I can’t wait for it!