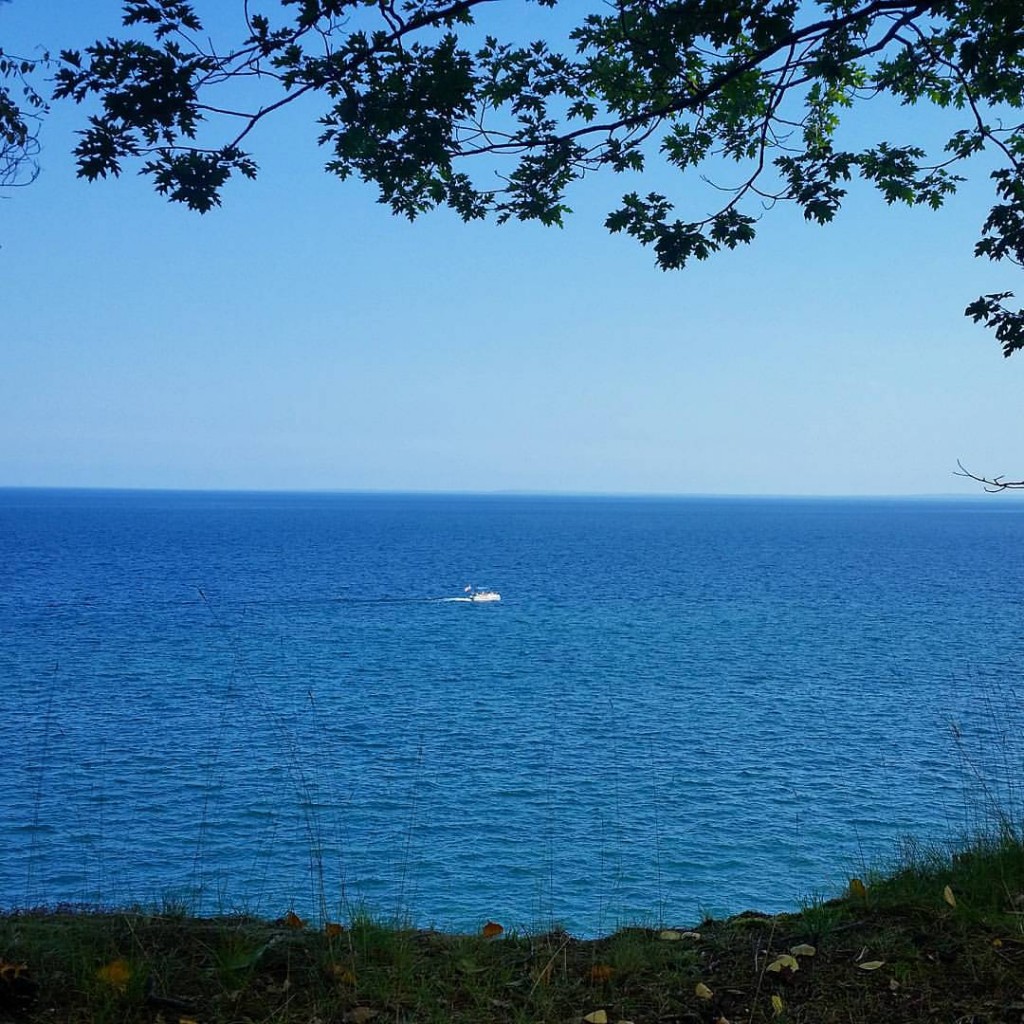 I went into this race with high expectations. Last year I ran a marathon in 3:30:37 – I wanted to do better. I knew I could do better. Marquette Marathon in the U.P. caught my attention. The course was advertised as a consistent down hill. I figured that with some nice cool weather along with that downhill I could definitely improve my time. Instead, I found myself at mile 17, literally falling apart thinking to myself “This is not what was supposed to happen…”

Somehow we lucked out and were able to book a hotel under a mile from the starting line and at a great price. The morning was calm and relaxed, everything seemed right. We still decided to drive to the starting line so that Andrew could get back to wherever her needed to be quickly. 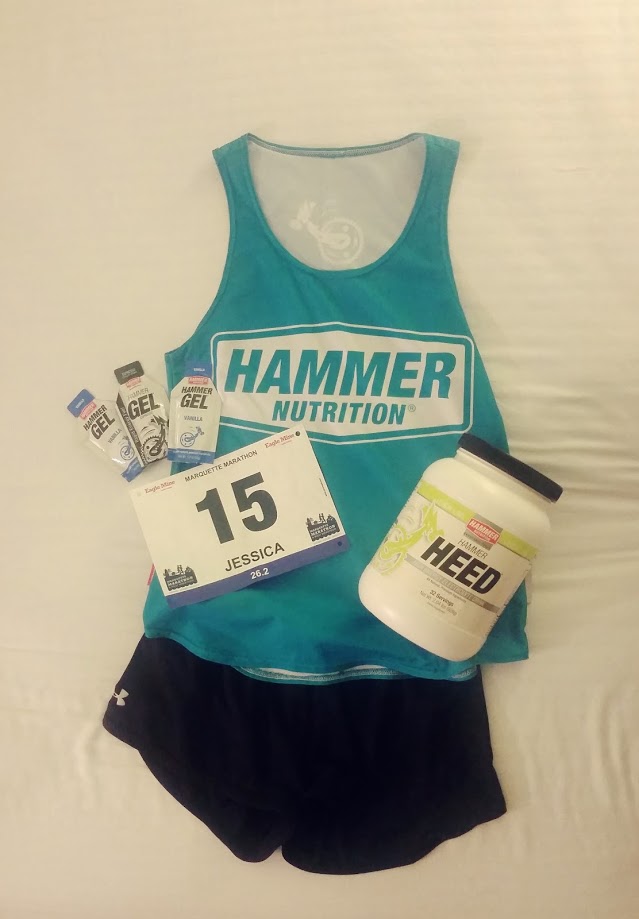 We got to the starting line. There was a thick fog in the air and the skies above were steel grey. Everyone was quiet. Groups of runners were bused from the finish line to the start. When we arrived there was a quiet energy. The fog made the mine shaft museum towers look otherworldly, almost alien like. People seemed to chat in a whisper, maybe because of nerves.

Overhearing conversations, people were clearly concerned about the weather prediction. Honestly, I didn’t even think about it much. I knew I couldn’t change it so I chose not to waste energy and worry about it. Looking back, maybe that was wrong.

I lined up on the start line with a group in the middle. People around me were chatting. A man asked me what my goal time was. I told him and he said “Good, I’ll chase you.”

Soon we took off and everyone around me seemed to fly off the line. I tried my best to not get caught up in that mess. I pulled myself back a bit and settled into my 7:45 goal pace. My goal for the race was to stay between 7:45 and 7:50 pace. As the miles clicked by I was able to consistently hold that pace and feel like I could sustain that effort. As I ran, I came upon two men. One was extremely chatty. He talked about his previous marathon PRs continually. Looking at this man, I was pretty impressed by his times. I just cannot believe that people can actually run that fast. We chatted along and I found out that one man, Shane, was an ultra runner. He chatted about different races he had done.

Throughout the race I was constantly waiting for the downhill which never seemed to hit. There were a few rollers and ups and downs but I never noticed a significant downhill. The course started out in Ishpeming and goes through town a bit before getting on the Iron Ore multi use trail. The trail is paved in some areas and gravel in others. The awesome thing about this trail is that it is mostly tree covered. Luckily, the fog and overcast sky stayed around for a while. When the sun did come out I did my best to stay in the shady spots. Andrew met me at the 15.75 mile aid station and I switched out bottles without even stopping. Our shaded run through the trees was over and surviving the heat and sun became my only goal.

I’m not sure how this happened but by mile 17 my pace had dropped from 7:50 to 8:50 and it only got worse as the miles went by. I found myself walking on and off. My heart rate was steady at 180 BPM and everything felt yucky. I couldn’t breathe and I felt like a zombie. Physically, my legs had more, physically, I could still run, but something was stopping me. I knew this feeling from dances with dirt. I was overheating. At every aid station I dumped cup after cup of cold water on my head to cool down.

I watched my goal pace slip away mile by mile. This became a race of survival. After the heat slowed me down a bit, I lost my newly acquired friend Shane. Eventually I caught up to him walking so i walked with him. He had been thinking of calling it a day. I asked him to run with me. He agreed and we kept going in the hot sun. I felt like my body needed to stop. We started doing short run walk bits. Finally we got to a section that went around Presque Isle. It was shaded but now we had to climb some rolling hills.

We were able to distract ourselves with chats about life, jobs and our families. We got a good amount of running and around the isle. After we circled, we had to run the same section and finally out the to finish line. We were in the sun again! We acted like pacers for each other, reminding each other we had to keep going. Finally Sean said “If you’re feeling good, GO! You can still get a decent time!” After this fight of a race, simply finishing was decent!

I decided to run the last 1.5 miles in. I knew I could. Most of the race had been lonely, usually, just Sean and I and a few runners ahead in the distance. Now, there were runners everywhere. Finally, I heard spectators and volunteers shout! “One more turn and to the stoplights! You can see the finish line from there!” But I couldn’t see the finish line. I realized then that the last bit to that finish line was a LONG gradual uphill and there was NO way I was walking up that!

Spectators lined the streets, some cheered and others just walked along the sidewalks enjoying downtown. This last climb up to the finish line was tough and JUST PLAIN MEAN. As I climbed and ran as much as I could, I wondered how many people had puked at the finish line. It seemed like a climb that might make ME throw up. 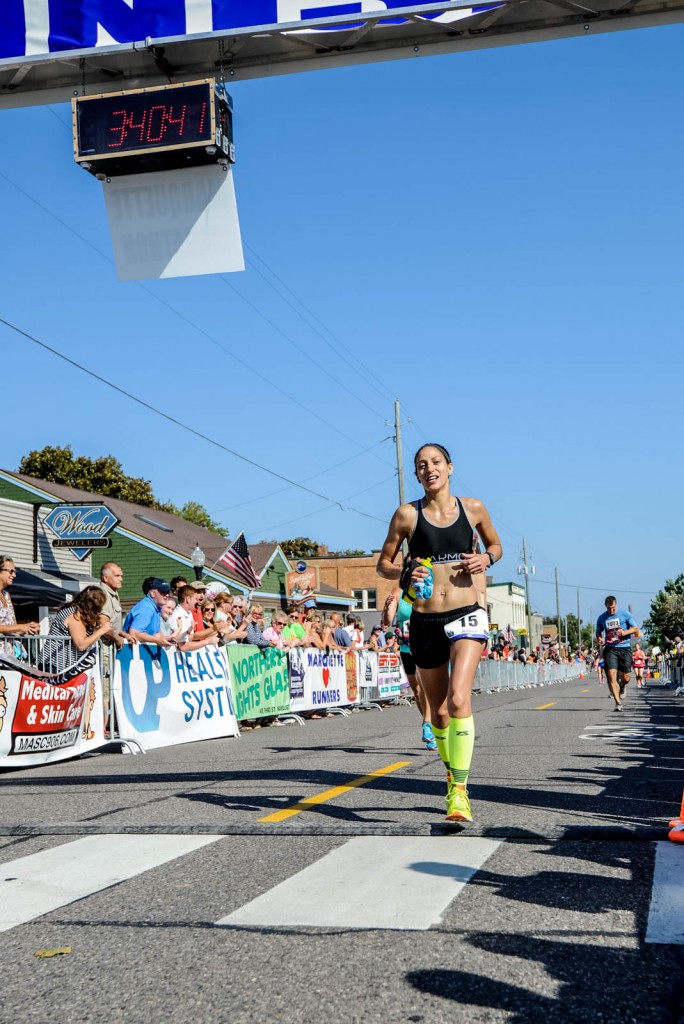 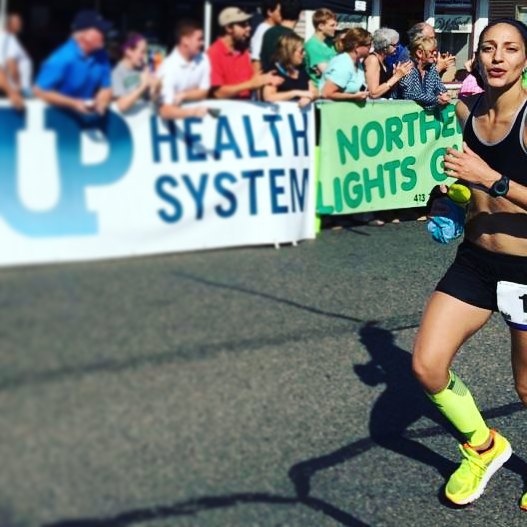 Finally, I made it to the top looking like I’d been through a battle. I looked for Andrew in the crowd. When I found him, I blew him a kissed and mouthed “I love you!” to him. It was the perfect moment. In that second, despite the crowd of people around us, it was just him and I, our eyes fixed on each other. .

After I crossed the finish line, two medical volunteers seemed to swoop down to me. One put his hand on the small of my back after he noticed a little wobble in my step. The other offered me water. “Do you need to sit?” A man asked me “We can go right here to the med tent, you need some shade.” I declined, the only thing I wanted and needed was Andrew. “I just need to find Andrew.” I said as I headed out of the finishers shoot to find him.

When I got out of the gate it wasn’t long til we found each other. We headed to a shady spot to talk about the race. From his face I could tell he wasn’t sure what to expect but I knew he was still proud.

I was so torn. This was a roller coaster and I had fought a long hard battle with the heat. I couldn’t help be completely embarrassed and almost ashamed. I went out to hard, but even so, I don’t think I could have done any better considering the heat and humidity. I tried my best to be happy in that moment, happy with myself and my race, but honestly I just wanted to cry.

The way Andrew looked at me, with so much pride and happiness, I knew that all those feelings were wrong. I just ran 26 miles, I just fought heat and humidity, yea, I just ran 26 miles! No matter how slow or fast, a mile is always a mile and I ran 26 in a row. On a day like this there should never be room to be embarrassed or ashamed. 26 miles of anything is HARD. Running is hard, no matter how far we go. It’s hard, it hurts and sometimes it just plain sucks. The fact that I woke up today, next to my person, in a beautiful place, ready to race, was something to celebrate. I was given another day to live, and live I did! 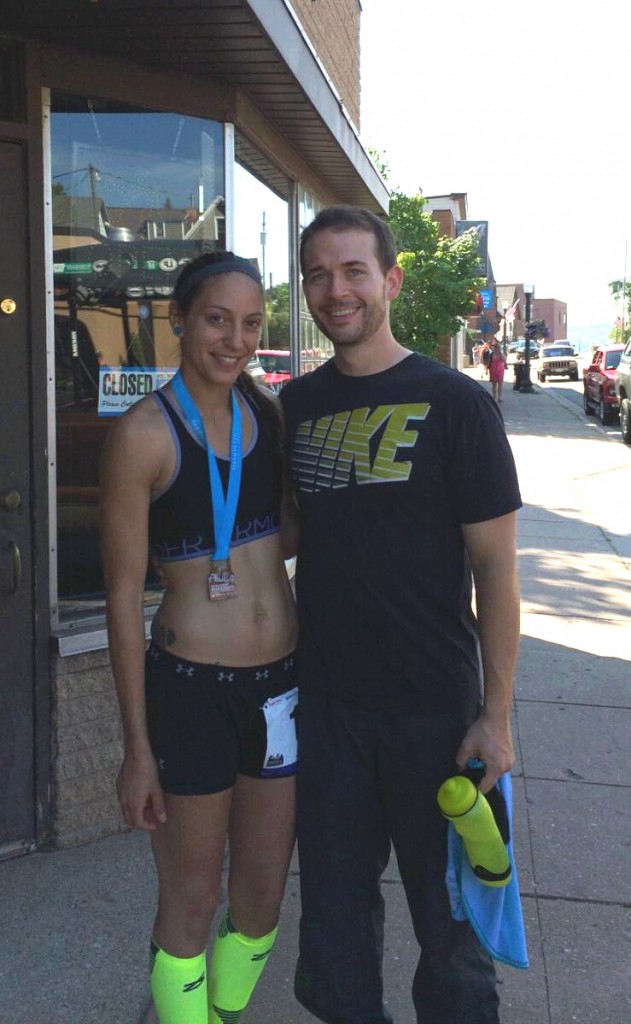 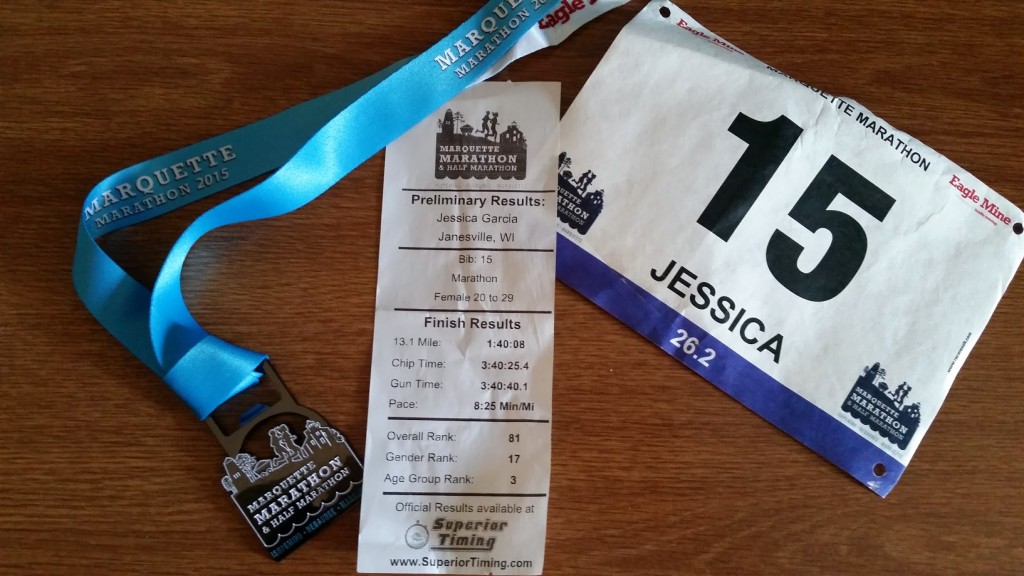